It won’t win him any awards, but give WSB’s Tom Regan credit for a fun and interesting special report Thursday. Regan showed off a device called “the Mosquito,” a sonic system that emits a pulse designed to irritate the ears of the young. The idea is to use the gizmo to drive off unwanted groups of “chillin'” teens.

Regan deployed it to an unsuspecting crowd near a school, which dispersed. He played it to a classroom full of teens, most of whom expressed annoyance by it. He also played it for anchors John Pruitt and Monica Pearson. Pearson, 60, told Regan the device irritated her. Pruitt, age unknown, couldn’t hear it at all. Regan suggested that classical music might have the same effect on teens. We suggest these guys.

The on-air acrobatics of WAGA’s news talent were in full flower during Thursday’s evening news. Not satisfied with walking and talking in the newsroom, WAGA put anchor Tom Haynes in what appeared to be the station green room to do a quick live shot on rising food prices. Haynes had milk, bread and eggs with him. It’s not likely the audience appreciated the logistical effort it took to put a live camera where it did– outside the newsroom, down the hallway toward the restrooms, past the art department and through two doors. The foodstuffs could have just as easily been on any counter, anywhere.

Of greater note, though, were the two live shots anchor Lisa Rayam did in the back parking lot. During the 5pm newscast, Rayam hoofed it out of the studio, through the garage and onto the asphalt. Rayam, who is considerably taller than the average homo sapien, folded her frame into a Volkswagen bug for a piece on gas prices. By the time the next segment started, the agile Rayam was back in the studio, chatting it up with weatherman Ken Cook. 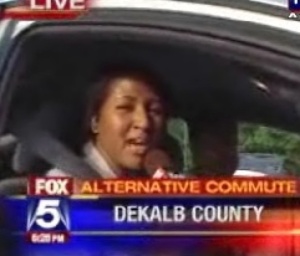 Rayam returned to the parking lot at 6, live in the passenger seat of a Toyota Prius Hybrid. Both stories were noteworthy for their use of WAGA staff as the central characters (sports EP Chip Zeller, on his practice of driving unnaturally slowly to save gas; assignment editor Richard Marlar on his new hybrid). Truth is, the pieces were forgettable. But Rayam’s engaging performances made them both fun to watch.

What we’d like to see: Stories about WAGA allowing its newsroom employees to telecommute.