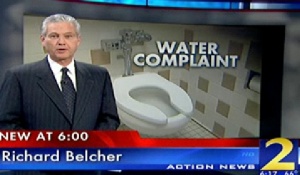 Exposing the waste while dodging the double entendres

Lori Geary’s lead story put the state’s budget troubles in stark perspective, focusing on cutbacks at the GBI.  Geary revealed that the GBI was asked to deepen cuts beyond the Governor’s mandated six percent, a tidbit the Gov’s office wouldn’t confirm.  She gave clarity to a potentially cloudy topic.  Grade:  B+

Richard Elliott did a serviceable job previewing a home foreclosure auction.  He trolled for buyers who showed up early, and quickly turned the material. Grade:  B

Ross Cavitt was live in Dalton with tape of a 911 call from a woman who watched the law office bombing unfold.  The tape was vivid, and it appears none of the other stations had it.  Cavitt also had a court document that foretold the mindset of the whackjob who did the deed.  Grade:  A-

Jeff Dore gave excellent perspective on Brian Nichols’ best defense witness:  A shrink who says Nichols was, in fact, legally insane when he went on his deadly rampage.  Dore’s TV coverage of the trial is the most clearheaded in town.  Grade:  A-

A bemused Richard Belcher easily had the weirdest story of the night:  An exposé on a toilet in a government building that has filled with hot water for some three years.  A whistleblower who’d complained about the obvious waste of money measured the temps in the bowl at 109 degrees.  Belcher put his hand in the bowl but sensibly stopped short of the water.  Remarkably, the public restroom was immaculate.  Belcher’s coup was getting the Lieutenant Governor to talk on TV about a wasteful state toilet.  Grade:  A- for Belcher, F+ for Lt. Gov. Casey Cagle

John Pruitt’s v/o about the Clayton County sheriff’s race debate featured a wandering studio camera that slowly panned away from Pruitt, to a visibly surprised Jovita Moore to an empty space in the studio.  Pruitt intoned “each candidate says he is the one who can get the department back on track  — unlike our camera.”  It’ll be in the Gorilla Ball.  Grade: B-

Mark Winne’s story about an investigation into a Sandy Springs cop showed uncharacteristic restraint.  The cop allegedly had sex with prostitution suspects — then interrupted the acts to call his Vice Squad backups to arrest them.  While writing the piece, Winne (like Belcher) doubtless had to self-edit numerous double entendres.  Drama points:  √ (out of five); Grade B+

Jim Strickland produced a predictable piece that featured the advice of a financial planner:  Don’t panic.  It was a weak link in Strickland’s otherwise strong local coverage of the financial fallout.  Grade:  C+

Political analyst Matt Towery showed up to predict that the presidential race would tighten.  Both candidates are saying the same thing.  Grade:  C

Chuck Dowdle’s sportscast was a rehash of the weekend, a look forward to next weekend, and mercifully short.  Grade:  B-

Overall: Despite a couple of odd technical glitches, this was a solid newscast  Grade:  B