Rodney Ho’s AJC blog reports WAGA is re-assigning its so-called Road Warrior.  Mark Hyman is returning to daytime general assignment reporting.  Ho says WAGA hasn’t decided how to replace him and is considering rotating reporters through the shift, a notion that probably chills the bones of some of the staff there now.

The Road Warrior is a worthwhile effort to take the hours-long Good Day Atlanta away from the tedium of the studio.  The problem is that it hasn’t worked well.  Hyman’s predecessor, Brett Martin, cultivated an image as an on-air fool.  It seemed to play well with the audience but made folks cringe at the TV station.  Hyman is a good reporter and is a genuinely funny guy.  But he isn’t a truly natural TV performer.

It isn’t just Hyman’s fault.  Too often, the segment finds itself at restaurants that have opened early just to accommodate WAGA. The Road Warrior needs a full-time producer to figure a way out of the restrictions that naturally occur at that hour.

Few have noticed, but WGCL has installed Sarah Parker as its version of the Road Warrior on Better Mornings Atlanta.  Parker may help that program expand its viewership beyond friends and family of the on-air talent.  She’s at ease, a bit wry and bubbly when necessary.  Like Hyman, she too often finds herself at restaurants. 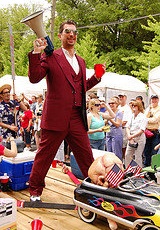 The problem with both Hyman and Parker is that they’re TV reporters.  WAGA needs to realize that this isn’t a reporter gig.  They need to hire a comedian. somebody who is smart and knows Atlanta and has some varied experiences as a performer.  A quick wit is essential.  A slightly subversive streak would be a plus.

WAGA would be lucky to get this guy.