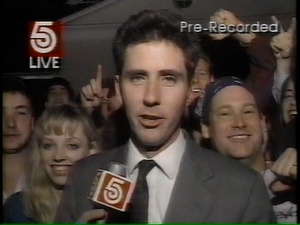 1.  The only time I tried to do weather, 1981, WTVA Tupelo Mississippi.  I had a weather map with magnetic pieces stuck to it, indicating weather images I’d made up based on AP copy.  I was absurdly nervous.  I used a pointer, and dislodged magnets when I nervously whacked the weather map.  It got worse when the studio camera operator, who liked to smoke the weed prior to newscasts, began laughing uncontrollably as I tried to retain control of my spiel.  FAIL.  Regrettably, it wasn’t recorded.

2.  My hiring at WAGA, April 1986.  News director Jack Frazier invited me to the newsroom at 9am, then ignored me the rest of the day.  I stood around awkwardly while newsroom personnel tried not to stare.  I found a sympathetic editor, Joanne Malis, and sweet-talked my way into her booth so I could hide.  At lunch, the assistant news director took me to Atkins Park, and I broke a bottle of ketchup.  That night, Frazier took me to a bar called PJ Haley’s.  He consumed three beers in twenty minutes, and offered me a three-year contract starting at $45,000 per year.

3.  In 1991, WAGA was sued three times because of stories I’d done.  One alleged I’d libeled a dead person, which was immediately dismissed.  Another claimed I’d libeled a schizophrenic.  The young man filed the suit himself and acted as his own attorney.  The judge allowed him to question me under oath in a deposition before dismissing the suit.  If you haven’t been cross-examined by a schizophrenic, you haven’t been cross-examined.  The third alleged that I’d failed to conceal the identity of folks whose identity I’d promised to conceal.  Word to the wise:  If your interviewee’s friends and neighbors can identify the “anonymous” interviewee, he’s not anonymous.

4.  Hurricane Andrew struck South Florida in 1992.    Photog Helen Lester and I got to Miami just as the storm was coming ashore, and slept in the lobby of the Miami Federal Reserve Bank.  The CBS station from which we worked had generator power only and no A/C.  The nearest hotel room was in Ft. Pierce.  Our cell phone was the size of a shoe box and worked intermittently.  We stayed a week.  I learned to edit under fire that week, as Helen left to do one-man-band coverage for our 11pm news while I edited for six.

5.  In 1994, I pitched a story on professional baseball in Japan. The pitch was a hail-mary, a joke.  But WAGA bought it.  They sent me and Steve Zumwalt to Tokyo and Kobe to follow a team called the Orix Blue Wave, which employed former Atlanta Brave  Francisco Cabrera.  The Blue Wave’s leadoff hitter was a rookie named Ichiro Suzuki, who hit .390 that year. I had to take a week of vacation in advance of the trip in order to do the legwork to make the trip happen.  The series aired shortly before Major League Baseball went on strike that year, cancelling the World Series.

(post is updated to correct the date of Hurricane Andrew.)