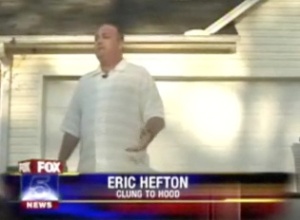 WAGA’s metronomic general-assignment drumbeat of petty exclusives and plodding reporter storytelling got a somewhat interesting reprieve Monday.  Denise Dillon’s piece on a guy who intervened in a hit-and-run accident wasn’t big news.  But Dillon’s storytelling was fun and the photog had a big ol’ time with a story that lacked visuals.

It helped that the subject of her story, Eric Hefton, was almost a little too into telling his story on TV, and recruiting his family to chime in.  But hey — we’re not judgin’ him, except to say that his decision to physically intervene in the incident may have been a misstep.  In so doing, he ended up riding up Satellite Boulevard in Gwinnett County on the hood of a drunk woman’s car.  Maybe he should have just gotten the license number and phoned 911.

Our favorite graphic is the lower-third super that describes Hefton as “clung to hood.”  But WAGA loses points for its graphic leading into the piece, which lamely read “wild ride.”  Grade:  B+