This post has been updated, correcting an error wherein we mistakenly reported that Mike Moore is currently a weekend anchor at WGCL.   Our bad.

Give WGCL credit for immediately recognizing the gravity of the story that erupted in Athens midday Saturday.  The killing of three people at a theater gathering was a big breaking story.  It was also a “talker,” a story that horrified and lodged in the consciousness of average folk.  It was the kind of story that would make normal people actually switch on their TV sets to see a breaking news story.

WGCL dispatched reporters Leslie Tanner and Michelle Marsh to Athens, where the manhunt had begun for University of Georgia professor George Zinkhan.  It also sent Mike Moore, who prowled for students familiar with the unlikely triple-murder suspect.  It gave WGCL the best presence on Saturday’s big story.

By 6pm Saturday, there were three ripe newsgathering scenes in Athens:  The scene of the triple killing, near downtown; in the at-large professor’s neighborhood, where police had gathered to look for him; and on UGA’s campus, where students and colleagues knew the alleged bad guy.  WGCL had them all covered. 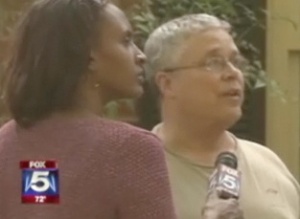 Despite WGCL’s manpower, WAGA’s Portia Bruner delivered the best piece we saw.  It appeared WAGA was the only station on-scene when a SWAT team showed up at Zinkhan’s house Saturday afternoon (he wasn’t there, it turned out).  Bruner’s piece was well produced.  She had compelling sound with neighbors, including a guy who saw Zinkhan drive into the neighborhood to drop off his kids shortly after the killings.

WSB sent Darryn Moore, who gathered some unhelpful amateur video of the SWAT assault.  The material was hand-held, telephoto’d and ‘way shaky.  Moore discarded it by the 11pm show.  At 6, Moore was live at the neighborhood where the SWAT standoff was still underway.  Give him credit for that. (And don’t look for it on WSB’s web site.  As of Monday morning, there is zero mention of the Athens story on wsbtv.com.)

WXIA’s Duffie Dixon, meantime, was live near downtown at the scene of the killings at six.  Dixon told her audience about the SWAT standoff across town, but wasn’t there to show it.  It was an underwhelming mirror-image of her competitors at WGCL.