There were a few surprises during our top-secret day-long visit to WXIA Monday.  Two of them stood out.

The first was the climate.  It was odd hearing day-laboring reporters and photographers speak of their mutual respect with management, a quality sadly lacking in much of my previous Atlanta TV experience.  It was as if I’d departed Burma, went into suspended animation briefly, then landed in Holland. 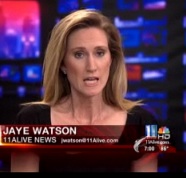 The second was a story told by Kenny Hamilton, the respected photog with whom I spent the day.  Hamilton is married to the reporter known as Jaye Watson.  Many have heard this story, but somehow I hadn’t:

A few days after Jennifer Watson joined the ranks at WXIA, she was called into the office by its famously erratic then-news director, Dave Roberts.  It seemed Roberts was troubled with the fact that he now had two blonde women reporters with the first name of Jennifer.

Because Jennifer Leslie had seniority, Roberts told Jennifer Watson to change her first name.  Watson resisted, then stalled.   The name has meaning, and she comes from a family that shuns nicknames.

Roberts pressed.  Irritated but uneasy, Watson finally said (something like):  “If you think the viewers are that confused, why don’t you just call me J. Watson?”  The standoff in the ND’s office ended when Watson was called to cover something at the airport.

Hours later, Watson hooks up to an earpiece to do a live shot.  From the control room, a producer remarks:  That’s an unusual spelling.

Of what?  Watson asks.

The reporter is unamused.   Her face is rapidly changing colors.  The voice shakes with anger.  Hooked to a microphone, she struggles to keep her language G-rated.

Then the anchor tosses to Watson’s live shot.   Watson delivers her story, and tags with her new sig out:  Jaye Watson, Eleven Alive News.  That was in 1999.

Today, Jaye Watson answers to both names.  In the newsroom and among friends, it’s Jennifer.  On the street, she answers to a name made up by a squirrelly news director whose shelf life was much shorter than the name he created for Jennifer Watson.