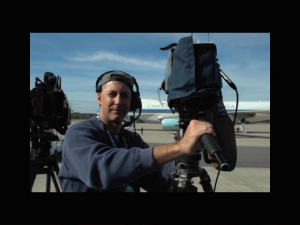 Hey Mike-- Air Force One is over there!

The name is weak, but here’s a thumbs up to “the local news service,” the video pool arrangement anounced last week among three of the four Atlanta TV stations.   Given numerous unpleasant alternative, LNS is a clearheaded and sensible effort to streamline costs and rein in the unwieldy beast that often rears its head in competitive TV newsgathering.  The AJC reported the details Thursday and Friday.

The concept of LNS is simple:  When a low-key event is scheduled that requires coverage, one photographer from one station feeds video to all three stations in the pool.  This arrangement already exists for courtroom feeds.  This would extend it to wreath-layings, groundbreakings, presidential deplanings, baby Panda sightings, certain news conferences and other events where the video would be identical if shot by four different news photogs.

This reduces the unwieldy presence of news photographers at certain events, and frees the TV stations to use their photog staff to cover stuff that requires more competitive muscle.

The LNS concept was originated by local Fox stations in other markets.  WAGA pitched it here.  WXIA and WGCL bought in.  While acknowledging the potential savings, WSB conspicuously declined to join.  Bill Hoffman, GM at WSB, told the AJC:  “Right now we’re trying very hard to hold onto our independence.”

Pool arrangements can be tricky.  Occasionally, TV stations will labor under the impression that the other guys are unaware of certain court hearings.  They are loathe to activate the pool if they want an exclusive.  Sometimes, TV stations don’t learn about certain court events until the pool is activated.  This frequently results in the TV news equivalent of a game of chicken.   But odds are, LNS won’t suffer from too much of this.

Local TV stations will save very little, if any, actual money under the arrangement.  If they want to do that, they’ll start pooling helicopter resources.