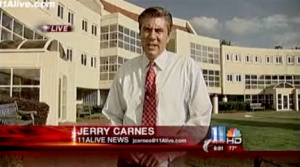 More to offer than a hankie: Jerry Carnes, WXIA

Jerry Carnes is a clever, talented and mostly healthy TV reporter.  He’s one of the best storytellers in town.  But this isn’t about Carnes’s strengths as a journalist.  This is about how the finger of fate can point, then keep pointing.

First, Carnes beat prostate cancer.  He’s been cancer free for quite some time.

Then, this summer, Carnes was bitten by a spider.  A brown recluse, apparently.  It was a pain in his butt, as only a spider bite victim can attest.

Last month, as the news media began getting geeked up (again) about H1N1 / Swine flu, Jerry Carnes got the bug.  That is to say, Carnes caught the damned H1N1 flu.  It jacked up his body temperature, gave him the sweats, flash-fried his cranium, churned his innards and kept him away from work.  Carnes had been stricken well in advance of cases now being reported around various Georgia college campuses and elsewhere.

So Carnes became something of a curiosity.  News folk typically speak in the abstract about the phenomena they cover.  Carnes was an actual test subject.

At one point, I overheard the following during an editorial meeting at WXIA:  Let’s put Jerry on Skype so he can do a live shot from his home about his flu.  Around the  conference table, there were muttered affirmations.

I don’t think the sick-bed live shot actually happened, though Carnes is a trooper and probably would have done it.  When he returned to work, he produced a first-person story about his illness.  To view it, click here.

His health restored, Carnes became the go-to reporter on the H1N1 story.  At first, it was because Carnes was interested in the story.  Such first-hand experience tends to stoke a reporter’s interest. 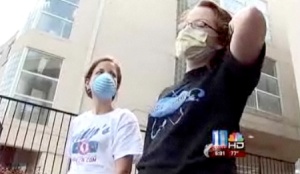 But Carnes had an even greater advantage:  Because he’d already gotten it, Jerry Carnes is immune to H1N1.  So when Emory created an entire dormitory for flu-stricken students, Carnes had little to fear by entering the building, breathing deeply and chatting up-close with college kids battling the flu.

“Been there, kid.  That’s quite a fever you’re running.  I feel your pain.  Oh, did you just sneeze on me while I was fitting you with a mic?  No problem.  Care for a Kleenex?”

Meantime, the rest of us have to wait for H1N1 vaccines, which (last I heard) are still weeks away from distribution.

WXIA has a reporter called the Commuter Dude.  He’s on in the mornings.  He’ll probably never run out of material.

Jerry Carnes now calls himself the Swine Dude.  He too has abundant material.  He has plenty of empathy.  And he has immunity, earned the hard way.