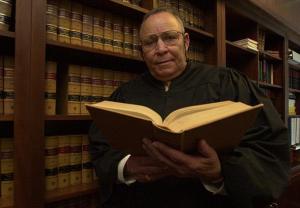 It started with a tip in my inbox.  The writer was a longtime denizen of the Gwinnett County Courthouse.  The tip directed me to check the status of Jim Oxendine, Senior Superior Court Judge.  The tip said that I would find that he’d been told by the other judges to take a hike because he’d been linked to a land deal scandal.

Oxendine is the father of John Oxendine, a longtime Capitol fixture now running for the Republican gubernatorial nomination.  But the senior Oxendine has his own bona fides, a judge of varying sorts for decades.

This presented a problem:  Nobody wanted to talk, on the record, about the demise of the Honorable Jim Oxendine.  But it wasn’t difficult to get ample off-the-record verification of the tip.  John Oxendine is arguably the frontrunner in the race for the nomination.  Gwinnett is controlled by Republicans, many with horses in the race with names other than Oxendine.

It was helpful that many of the same characters with whom I’d developed relationships in the news biz prior to my two-year hiatus were still around.  It was as if zero time had passed.

But I didn’t know the Gwinnett County Court Administrator, and he was among the least talkative.  It seemed like a simple question for a guy managing a public body:  Is Judge Oxendine in, or is he out?  Phil Boudewyns laid low during my numerous calls to his office Monday.

I called again Tuesday.  The silent treatment continued.  I paid a visit to his office, where a secretary said he was in a meeting.  I left.  Down the hall, there was a counter beneath a sign that said “Superior Court.”  I approached, and cheerfully asked the two ladies at the counter if I could speak to Judge Oxendine.

They looked nervously at each other. “I was wondering how we’d answer that if somebody asked,” one said to the other.  I asked if Oxendine had an office there.  One lady said “not anymore.”   She’d recognized me as a TV reporter guy, and said she’d get a message to her boss, the elusive Mr. Boudewyns.  I asked her for her name, which she politely gave me.

She suggested I try Boudewyns by e-mail.  I wrote a bland note.  I told him we’d be airing a story at six regarding Judge Oxendine’s forced departure.  I asked him to return the call, please.   Meantime, the off-the-record confirmations continued stacking up.

He e-mailed back.  He said the court would have no comment.

On my Blackberry, I wrote back:  “I’ll have to attribute my info to [the woman at the window] then.  I’m sure we’d both prefer that I get it from you.  Even to say ‘no comment,’ please call.  This is the sixth time I’ve asked you to call since yesterday.”  I’d played nice long enough.

Boudewyns called back within minutes.  He confirmed that Oxendine no longer had an office at Gwinnett Superior Court.  He verified that his office was vacated Friday.  He would not confirm the reason.

We stopped by Judge Oxendine’s home.  His wife answered and politely told me he was out.

That evening, the bosslady suddenly hit me up:  “So, what’s the lead gonna be?”  I answered:  “Has a Gwinnett County land deal investigation claimed the job of a longtime judge?”  Apparently, I thought I was on Jeopardy, not 11 Alive news.

“What!?!?!” she answered in bold italics, with at least three exclamation marks.  Imagine Sandy Duncan feigning code orange indignation.  The bosslady couldn’t hide a smile.  She knew she’d nailed me.  “I was just trying to give you the strongest lead,” I said, trying to retain my rapidly-draining old-guy gravitas.

“You can’t lead the story with a question!” she went on.  “You can’t prove that the land deal caused his departure.  You have to keep those facts separate in the story.  Let the viewers connect the dots.”

She was right, of course.  Silently, I blamed the pockets of rust that had formed over the previous two years of news biz inaction.  We aired the story at eleven.

The next day, John Oxendine phoned me.   He was in South Georgia that day.  We asked WMAZ, the Gannett station in Macon, to catch him at an event.  The WMAZ reporter asked him if he knew about his father’s involvement in the land deal.  “Not really familiar with it.  Been a little busy, you know.  Running for Governor, being Insurance Commissioner, Fire Commissioner.”  We based a follow-up story on this material.

One hour before airtime, the campaign e-mailed a statement from Jim Oxendine, verifying that he had “accelerated” his planned retirement “because of questions that have arisen regarding my executing certain documents with a power of attorney.” We had shown those documents in our story the previous day.

The next morning, the story was on the front page of the AJC.  The newspaper had done the original reporting — the heavy lifting — on the questionable land deals, resulting in the DA’s investigation.  Tim Eberly of the AJC wrote an extensive follow-up September 20.  Based on that material, and public records, the judges told Oxendine to hit the road.

I just happened to get a timely tip advancing the AJC story.