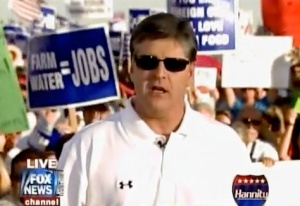 Many pixels have been spilled (as well as a few quarts of ink) about the Obama administration aggressively snubbing Fox News.  Most commentators have chosen to use Nixonian analogies, typically concluding that presidencies rarely win in such conflicts.  This may be Obama’s fate as well.  I’m not smart enough to know.

But I think the analogy is the wrong one to use.  Obama’s people argue that Fox is the “research arm or communications arm of the Republican Party.”   To me, that’s not a problem.   The media is supposed to research what’s wrong with government.  If Fox unearths legitimate issues that undermine the administration’s agenda, so be it.

Likewise, if Fox approaches news from a conservative viewpoint, so be it.  From the dawn of the Republic, newspapers have been rooted in political viewpoints.  There’s no reason why Fox or MSNBC should be any different.

But for some reason, I never hear this argument:  Fox is a political organization in and of itself.  Fox crosses the line when it organizes and promotes issue-related rallies, like the Tea Parties or Sean Hannity’s water rally in California (wherein he decried what he claimed were environmentalists choosing endangered species over people).

Once a media organization becomes a political organization, then it loses its credibility.  You can’t do both.  You can’t actively rally folks to a viewpoint, then expect the other side (or anybody else, except for your amen chorus in the audience) to take you seriously as a news organization.

Jon Stewart also overlooks this argument.  But he makes some other good points, bolstered by Fox’s own spin. 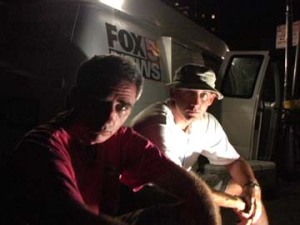 When I worked at WAGA,  folks loved to roll down their windows at stoplights when pulled up alongside marked “Fox 5 News” vehicles and holler passionate words of support for the Fox News Channel.  I always absorbed them with a friendly nod and a fake smile.  Sometimes I threw in a “hell yeah” for comic effect.

One time, a photog and I happened to drive by a small lefty-type protest at Ponce de Leon Ave. and North Highland.  One of the protesters scrunched up his face and spat on the windshield.  The loogie landed squarely in the drivers side.  It was a nice hit on a moving target. 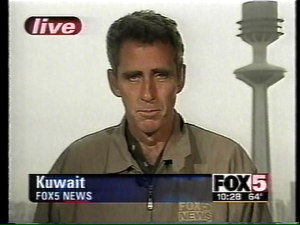 He didn’t know that WAGA’s Fox 5 News occasionally uses Fox News Channel as a resource (and vice versa), but otherwise has very little to do them.   In 2007, a few weeks before I left WAGA, I did a live shot on Shepard Smith’s afternoon newscast.   In 2003, I did a live shot from Fox’s bureau in Kuwait City.  (It’s worth noting that as the US/Coalition was invading Iraq, Fox’s staff in Kuwait City showed no behind-the-scenes hint of ideology.  They seemed only interested in covering the story and doing it safely, like any other TV network.)

As of 2007, nobody from Roger Ailes’ office had ever tried to put a political spin on WAGA’s news coverage, to my knowledge.  I suspect WAGA is still a very, very distant blip on Ailes’ radar.  Most folks don’t know that WAGA also had a resources-sharing relationship with CNN until recently.

So the loogie gesture was a bit misplaced.  But I respected the protester’s power to spit accurately.  And I understood his confusion.