It was a last-minute mini-brainstorm, which took place at a traffic light during the morning commute.  It went something like this:  Eight days after the runoff, Kasim Reed may finally become the undisputed mayor-elect today.   We should hang out with him.

Reed had scheduled an 11am news conference to announce his new interim police chief.  I called his communications guy, Reese McCranie, and left a voice mail.

At the news conference, McCranie said he hadn’t listened to my message.  I made the pitch:  We know the recount will be finished this afternoon.  In all likelihood, Mary Norwood will finally concede.  We want to be nearby.

It was a last-minute request for unusual access to the next mayor.  McCranie’s instinct was to reject it.   “I’ll see what Kasim says,” said McCranie.  “I don’t know what’s on his schedule.”

We lingered at the end of Reed’s news conference.  So did Reed. I made the pitch directly to Reed.  Reed’s instinct was to accept  it.

Victory lap: Reed near the Capitol

Many political PR folks would have taken offense at my approach.  McCranie, a twenty-something guy who earned the respect of reporters covering the mayor’s race, took none.  “We’ll make it happen,” he said.

The news conference had taken place at Reed’s transition office at city hall (set up despite the fact that the election was still unsettled.  Reed’s mentor, Mayor Shirley Franklin, gave Reed the space in the old Board of Aldermen meeting room).   We hung around city hall.

Then McCranie disappeared to watch the recount across town.  Reed slipped out a door to attend a meeting.  Photog Pete Smith and I went to the Capitol for lunch.

The recount was expected to take most of the day.  It finished by 12:40pm, and went to Reed.    “You just missed Shirley Franklin,” said McCranie when we returned.  We entered Reed’s “office” — a curtained-off area in the old Board room — where he was taking congratulatory phone calls.  He had just talked with Norwood, who’d phoned to concede.  WXIA reported Norwood’s concession, a small but significant scoop.

Following the phone calls, Reed said he needed some air.  We watched as Reed walked from City Hall to his car at the Capitol and back.  Reed received congratulatory handshakes and horn honks.  We chatted about the upheaval in the state House of Representatives.  Reed had just resigned as a Senator to run for Mayor.

At a street corner, he pointed to the tower in the old City Hall building.  “Do you know what’s up there?” he asked me, pointing to the top floor.  Like Reed, I’d never been to the 17th floor.

Following our walk, other news media began to gather at Reed’s office.  He’d scheduled another news conference, his first as the undisputed mayor-elect.

I got in the elevator and rode to the top floor.  At the fifteenth floor, I saw the Office of Grant Management.  “What’s upstairs?” I asked a city worker.  She didn’t know. 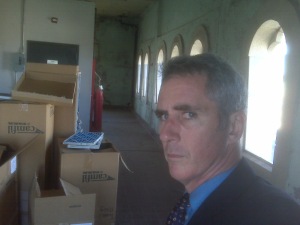 I went into the stairwell, where I saw a sign that said “no roof access.”  I tried the door.  It was unlocked.  I entered the mysterious top floor of the City Hall tower.  It was filled with boxes, cobwebs and wasp nests.  I took three photos.

And then I went to Kasim Reed’s news conference.  I’d intended to show him the photos, but a 6pm deadline pressed.