Here’s a not-so-heartwarming story for the holidays.

Dan Reilly cues tape to show to an accident investigator. (That's not "the" black Honda behind him.)

Dan Reilly and I were driving up I-85 Wednesday.  We’re en route to Lawrenceville.  We’re doing a story on a trial balloon floated by Butch Conway, the High Sheriff of Gwinnett County:  Because he can’t get funding for deputies to staff housing units in his new jail wing, Conway is considering filling the empty jail space with stray dogs and cats.

We drive past Beaver Ruin Rd.  A black Honda Accord zips around us at an inappropriately high rate of speed.  “Idiot,” one of us says to the other.  We’re in the left lane; the Honda has driven past us in the HOV lane, then back into the left lane.

We see the Honda cross multiple lanes to pass traffic ahead of us.  The Honda is driving dangerously.  Traffic is heavy, but moving at the speed limit and beyond.

Within twenty seconds we see a puff of smoke and dust.  There’s tumult to the right of us.  We see a white mini-bus careen to the right, flipping upward, then down again.  Brakes light up.  Traffic grinds to a crawl.

“I bet the black Honda did that,” says Reilly.  We pull past traffic to the right shoulder.  Additional vehicles have already begun to pull over.  One car has pulled into the left emergency lane.  The driver exits the vehicle, and hoofs it across the interstate.  It’s a dangerous move.

By the time we get to the right emergency lane, we see an ugly tear in the side of the bus, which appears to have flipped but is now upright.  There are bodies on the pavement, ejected through the hole torn through the bus.

“That’s the Honda,” says Dan.  We pull in behind it.  Dan identifies the Honda because he’d made note of a round sticker on the back glass that says “South Carolina.”  We get out.  Dan goes for his gear.

I walk toward the Honda, which has a woman inside.  She’s young, with dark hair scrunched into a thick ponytail.  I produce a notebook and pen and write down the license number.

I walk to the side of the car.  She starts to drive.  “Where the hell are you going?” I holler.  She smiles and waves, as if she’s not really leaving.

Driver of the year: Joy Wilson, 32

She takes off down the highway,  then stops about 200 yards away.  Dan shoots video of the Honda.  The driver pauses.  Then we watch her drive off.

We turn our attention to the accident scene.  A half dozen victims are prone on the pavement.  Many are yelling and bleeding.  A small army of bystanders has come to their aid.   Dan keeps a respectful distance and starts to shoot video.  I walk toward the victims.  All of them are getting attention from bystanders.  All of them appear to be conscious.  I determine that I’d best stay out of the way.

I begin to converse with witnesses.  They confirm that the black Honda had clipped the bus and caused the accident. 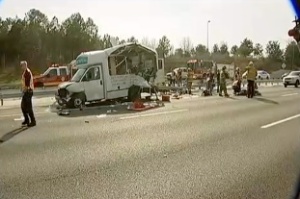 Gwinnett police and rescue crews began to show up very quickly.   They shut down the interstate.  Thankfully, we’d parked just ahead of the wreck.

News helicopters seemed to take an eternity to show up, however.  The helicopter shared by WAGA and WXIA showed up well ahead of the others.  I’d already called the desk once to tell them we were on scene and likely to be questioned by police.  When I saw the news helicopter, I looked at my watch and realized that WXIA’s noon news was on.  I called again and asked if they wanted a phoner.  I report that it’s a hit and run accident involving a bus loaded with developmentally-disabled adults.  A cop interrupts me a couple of times with questions, not realizing (or caring, perhaps) that I was doing a live report.

Police start to question us about the driver of the Honda.  They hand Reilly and me a clipboard and ask us to write out a statement.

The whole time, I’m thinking:  I sure hope I still get to do the story about the dogs and cats at the jail, because I really like that story and no other media has it.  Turns out, the managers at WXIA had read my mind.  I was told to get Reilly’s video to Matt Pearl, who would produce the piece on the wreck.

Although I shot video of police talking with Reilly, and Reilly shot some of them talking with me, Pearl’s piece showed admirable restraint regarding our role in ratting out the driver of the Honda.  She was in police custody within a couple of hours, charged with DUI (at 11:45am!) and other offenses.

By midafternoon, Reilly and I had finished shooting our dogs-in-jail story.  A law enforcement type from Gwinnett phoned me at 2:30, while I was getting a QT hot dog for lunch:  “I hear you got the tag!”