I don’t know of a more haunted place in the world than Central State Hospital in Milledgeville.  Picture a huge college-style campus filled with large, empty, hospital-sized  brick buildings dating back to the 19th century; stuck hard among pecan trees in a hard-to-reach part of Georgia.  Add to it a rough history that began as the “Georgia Lunatic Asylum,” and the draw becomes obvious.

Because state law protects the anonymity of patients at CSH, there’s not much to shoot there except the buildings.  Granted, the buildings are amazing.  Seeing rows of hospital-sized buildings moldering on a lovely campus is kind of breathtaking. But I didn’t want to do a story on empty buildings.

The archival photos and footage, much of it provided by CSH, helped a lot.  So did the interview with the father of a patient.  An unplanned interview with longtime Milledgeville resident Katherine Fuller became indispensable.

But ultimately, it came down to shooting buildings.  WXIA photog Mike Zakel was as drawn to the  gothic setting as I was.  Yet shooting static buildings makes for dull TV.

CSH wouldn’t allow us inside any of the numerous condemned buildings on campus (there are photos I poached from a blogger who apparently snuck inside one of them last year).    But CSH allowed us inside an empty hospital building that’s still maintained, used for patient overflow in case of an emergency or disaster elsewhere in Georgia. 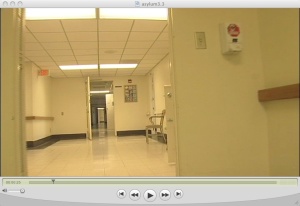 At this point, I freshened up an old trick I’ve used for years when confronted with dull office-type video settings.  You might call it the poor man’s jib, or the cheap truck.

I asked PIO Kari Brown to produce a wheelchair.  Curiously, there was none inside the hospital building.  I asked for the next best thing:  An office chair with wheels.  Brown found one.

Zakel sat in the chair, shouldering his camera.  I pushed.   We went up and down a hallway several times.  Zakel sat sideways shooting rooms as we passed.  On the next pass, he sat forward.  Each shot of the empty space had slow forward or lateral movement that gave it needed life.

The rolling office chair is a technique that’s especially suitable for stock brokerages, technology spaces and other indoor settings that scream “dullsville.”  It’s a step up from the photog-walking-while-rolling technique frequently seen in TV news.  The downside is:  Office chairs, with their multiple tiny wheels, often have a mind of their own, direction-wise.  Especially when laden with 200 plus pounds of photog and gear.  The reporter pushing has to be prepared to muscle up, and hope the floor surface cooperates.

The office chair jib is an offshoot of the shoot-from-a-driving-car technique employed for the exteriors on this shoot.  Photogs mostly despise it.  Their positioning is ergonomically awkward when pointing a lens out a car window.  They can’t control the framing with their accustomed precision, and they’re dependent on the driver (the reporter, typically) to maintain a smooth speed.  Zakel shot lovely video of the decaying campus from his tripod.  But the rolling shots maintained the story’s visual pace.

And that was essential.  The story was about government, history, science, the mentally ill — and buildings.