I don’t know the identity of the blogger who calls herself Local News Queen, nor do I want to know.  If you or I find out, I’m afraid she’ll stop writing.  She needs to keep writing, anonymously and frequently. 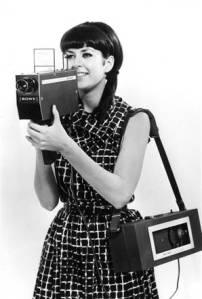 I don't know her ID, either

LNQ writes what I can’t write — the kind of dead-honest insider stuff that hilariously describes the not-so-glamorous minutiae of the overworked and underpaid local TV reporter.  I don’t know which market she works in.  I’m not even completely convinced she’s a “she” in the strictly anatomical sense (versus, say, the Bowie-esque sense).  It doesn’t matter.  She is everyman / woman.

She can write stuff like “The town we were in had one stoplight and apparently no dentists.”  I can’t write stuff like that about the Rockwellian small towns of Georgia, even when it’s true.

She can describe her station’s fleet of news vehicles thusly:  “That’s how we roll, bitches!… Each news car smells the same. It’s as if an obese man ate a basket of garlic toast and died in the backseat.”  I wouldn’t dare  describe WXIA’s pristine, lilac-scented vehicles with anything approaching such language.  Even if it was true, which it isn’t.

Here she writes about a reporter having to work a second job in an amusement park to make ends meet.

Here she writes about her secret loathing of stories about Haiti fundraisers.

Here she writes about having an embarrassing “emergency” in an out-of-order public restroom, only to have a viewer spot her as she emerged.

She only started writing it this month.  She appears to be writing new material most days.  She needs all the encouragement she can get.  Feel free to sidestep LAF for a few days and click on Local News Queen instead.  And please don’t try to rat her out, especially you investigative hotshots.  Back off.  Let the Queen do her work.

Local News Queen is now in the blogroll to the right under “Media Sites.”