I’m in a courtroom on the seventeenth floor of the Richard B. Russell US Courthouse Thursday.  Because it’s federal court, no cameras are allowed.

Vernon Jones hears a verdict ordering him to pay tens of thousands of dollars to two former DeKalb County employees who complained in court of a “racially hostile work environment.”  While court is in session, he bolts from his chair and heads for the exit.

I get up from my seat in the gallery and follow him out.  “Doug — stay away from me,” he growls.  There’s unmistakable venom in his voice. 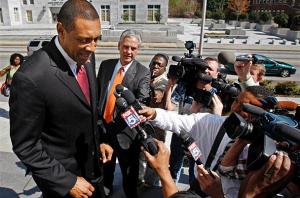 Two other reporters, WAGA’s Aungelique Proctor and WGCL’s Bernard Watson approach Jones.  His body language is completely different, and he chats amiably with them.  I step toward them.

“Doug– if you don’t get away from me, I’m going to call security and tell them you’re harassing me.”  He walks away.  Proctor and Watson follow closely.  I hover from a short distance.  I haven’t uttered a word to Jones at this point.

Jones walks toward WSB’s Richard Belcher.  Again, the body language is friendly.  I tighten my orbit.  Jones:  “I’m sorry, but I’m not going to talk to you guys if Doug is around.  He’s got to stop harassing and intimidating me.”

I’m not making this up.  He’s standing next to Richard Belcher — the embodiment of a TV news tough guy.

And I’m intimidating him?

Jones:  “And I hope it’s another five hundred years before I see you again.”

Belcher, Proctor and Watson convince Jones to speak to reporters outside the courthouse, where TV photogs are waiting.  Jones heads to an elevator.  A voice in my head tells me to jump on the elevator with Jones.   I decide against it, and grab another elevator to the plaza level.

Jones appeared outside the courthouse within a few minutes, then announced that he wouldn’t say anything until 10am the following day.  I fired two questions at him during the scrum.  Jones pretended not to hear them.

I got to know Jones during his tenure as DeKalb County CEO, a position of power that arguably exceeds that of Atlanta Mayor.  Jones was almost laughably controversial, except some of the details of some of those controversies aren’t at all funny.

I covered all this stuff for WAGA, as did Proctor and Belcher and other reporters at other news organizations.  Unfortunately, I can’t clearly identify why Jones seems to have a special place in his heart for me.  I covered Jones with the same vigor and fairness I would use to cover any other public figure constantly mired in controversy.

In 2004, the AJC reported that DeKalb police ran numerous, unauthorized background checks on several of Jones’ political enemies, as well as some reporters covering him.  I was among them.  Jones was never implicated in the investigation. 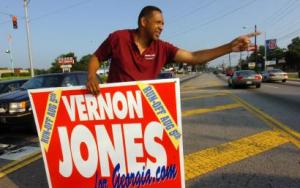 Once, I went to Liane Levetan’s annual hot dog party and saw Jones there.  (Levetan was Jones’ predecessor as DeKalb CEO.  She lives in my neck of the woods.)  Jones cornered me and launched into a bitter, semi-coherent tirade about my coverage of him.  He felt that my presence at Levetan’s party proved that I was in cahoots with his political enemies.  “If I threw a party, there’s no way you would attend,” he said.  It was very, very weird.

I had another similar encounter with him on the sidewalk outside his office.  I was in a live truck, editing a story for the noon newscast.  Jones had just held a press conference.  He came to the truck, and berated me for the questions I’d asked.  The questions were, of course, probing but quite reasonable.  His tirades were always personal and ugly, and laced with twisted logic that suggested something approaching genuine madness.

Jones has some qualities I actually admire.  He’s a gifted politician.  He’s articulate.  He’s well-groomed and well-dressed.  He has a certain rogue charm that one could find appealing.  My personal feelings toward him would be nonexistent, were it not for the odd behavior he has directed toward me all too regularly.

Vernon Jones is now running for Congress, and I’m on his e-mail newsletter list.

During his re-election campaign in 2004, I was also on his e-mail list.  One item announced a birthday party for Vernon Jones at a Buckhead nightspot.  Because of our conversation at Levetan’s party, I made a point of attending.  I thought it might give me an opportunity to bury the hatchet with this guy.

The wife and I stayed for an hour or so, but we only saw Jones from a distance.  I wanted to make sure Jones knew I was there, so we approached him as we departed.  He all but ignored me, but chatted emphatically with the missus.

“Tell Doug to stop harassing me!”