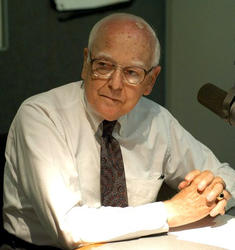 Aubrey Morris did a lot of good things during his thirty-plus career as news director at WSB radio.  But when a reader urged me to commemorate his passing last week at age 88, he recounted a story that any modern-day local-news broadcast type will recognize.  This passage comes from Gene Asher’s book, Legends:  Georgians who Lived Impossible Dreams.

“One morning, arising at his normal wake-up time of 5am, Aubrey looked out his bedroom window and saw blankets of snow covering his neighborhood… The snow was so thick, he could not get out of his driveway.

“In those days… the office and restaurant boom northward had not begun.  If you did anything in Atlanta, you did it downtown.  A concerned Aubrey got on the air about 6am and stayed there until 9am warning all Atlanta citizens to “stay home.  Do not attempt to go downtown.  It’s too dangerous.”

“Shortly after Aubrey went off the air, not only did it stop snowing, but sun broke through the clouds and temperatures began to rise.  Snow melted.  There was no ice on the roads, and no people downtown.  It was an event Atlantans would remember as ‘the day Aubrey Morris paralyzed the city.'” 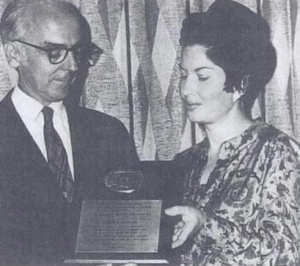 Morris is described as an energetic, gravel-voiced, old-school newshound.  He traveled to Orly airport in 1962 when a crash in France claimed a planeload of Atlanta glitterati.  He covered the civil rights movement.  He covered the Winecoff Hotel fire in December 1946.  He chased down Sweden’s King Gustav on the 18th hole of the East Lake Country Club.

I didn’t know Morris, but a lot of folks who did have commented on Rodney Ho’s blog.

WSB-TV reporter-for-life Don McClellan knew Morris.  He posts a remembrance on his blog, along with a photo showing them tag-teaming an interview with Robert Kennedy shortly before he died.

Morris started as a reporter with the Atlanta Journal, and was recruited by WSB radio legend Elmo Ellis to become the station’s first reporter in 1957.  His career in radio lasted thirty years.

Anybody working in the news biz in Atlanta walks a trail that Morris blazed.  Including over-the-top coverage of snowflakes.