Local and federal courts are re-writing standard charges to juries to prevent jurors from using popular internet sites during trials.  A Fulton County rape trial recently ended in mistrial because a juror researched the case on Google.  I successfully pitched a story on it.

We went to the Fulton County Courthouse to interview a judge and to shoot video of folks wearing “juror” badges outdoors during their lunch breaks.  When we got there, we saw a crew from WSB camped out in front of the courthouse.  TV crews periodically set up there, but it was odd that they were there — and with no other media company but us — at the exact moment we decided to shoot the Twittering jurors story.

“You guys are in the exact spot where we need to be.  You’re going to have to move.”  I was joking, of course, and they knew it.  We made small talk, but didn’t divulge why we were there.  And I didn’t ask them why they were there. 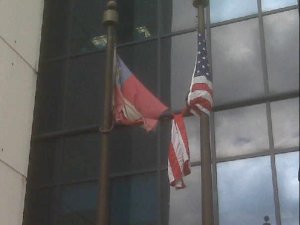 Given the absence of discussion regarding the obvious topic, the small talk stayed brief.  The reporter, Ryan Young, pointed out the unhappy flags atop the poles outside the courthouse.  We both shot photos of them and posted them to our Facebook pages.

But it was the obvious question:  Why are those guys camped out here?  As the minutes passed, the unanswered question loomed larger.

I knew it was unlikely they were doing a story on Twittering jurors.  They saw Dan Reilly shooting pictures from his tripod and did a double-take.  There was nothing remarkable going on, except jurors walking around.

A sheriff deputy with whom I’ve been acquainted for many years called to me from a car:  “What are you shooting?”  I stage-voiced an answer:  “It’s a super top-secret exclusive story!  Can’t tell ya.”  The answer was mostly for the benefit of my competitors.

About 75 percent of the time, I’ll straight-up tell my competitors why I’m there in such situations.  The secret-squirrel stuff is better performed by other reporters in the market, and my Twittering jurors story wasn’t exactly hot stuff.  But I had never met Young previously.  Probably next time, I’ll just blurt it out.

An Atlanta cop walked up to Young and asked him the same question.  Gesturing to me, Young answered:  “If he’s not gonna give it up, I’m not either.”

After about a half hour, the WSB crew left without shooting a lick of video.  We went inside and interviewed a judge.  We shot a standup inside Judge Rowland Barnes’s courtroom because it happened to be available.  That night, Reilly and I produced the Twittering juror piece.

I never found out what Young and his photog were waiting for outside the Fulton County Courthouse.