Occasionally, the TV news goon finds himself in a space filled with people, and has to randomly select potential interview subjects from the crowd.  This happens in shopping malls.  It happens at ballparks.  It happens at airports.  My latest brush with it was at Hartsfield-Jackson.  It was a lesson in humility, a subject in which TV news provides continuing education.. 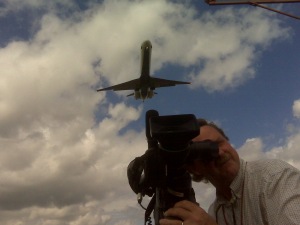 The easy part was finding the spot outside the airport, where incoming aircraft fly directly overhead.  The video is generic, but necessary given the limitations of the visual opportunities inside the terminal.

The fun begins when trying to strategize our positioning indoors.  I wanted to talk with businessmen / women, folks who might have anecdotes about air rage.  Thus begins the profiling.

I avoided the baggage claim area which, I reasoned, would be mostly clogged with tourists (though an exception is the oversized baggage area, where men can claim golf clubs.  Golf clubs are routinely carried by salesmen).

We found a spot between the Delta ticketing area and the South security checkpoint, and looked for business travelers.   I ignored slow-moving groups of happy-looking people wearing t-shirts.  I avoided groups with children or elderly people.  I avoided groups of any kind.  Groups of people love nothing more than to point and laugh when approached by strangers accessorized with TV cameras. 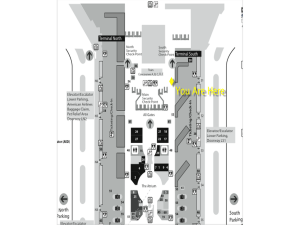 I looked for individuals with carry-on luggage, clad in business or business-casual attire.  They were abundant.  Many had hard looks in their eyes, a game-face worn to bear down on  airport rat-race checkpoints.  Most were white men, so I made a point of approaching African Americans and women.

The first moment is almost always awkward.  Strangers rarely approach folks walking through airports.  Unless they’ve given the camera a long look — and correctly interpreted the hungry expression on the accompanying reporter — they’re always surprised.

“Hi, I’m Doug with channel 11.  We’re shooting a story here today.  Got a second?  Do you travel much?”   About half the time, the target of my inquiry brushed me off with an “I can’t”  or “I’m late” or stony silence.  One woman gave me an icy glance during my spiel and wordlessly ricocheted her rolling luggage into my shins.  Of course, I apologized to her.  She ignored that too. 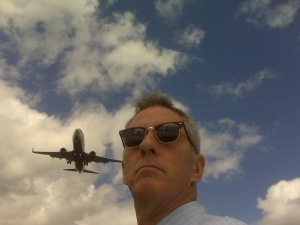 More records than the KGB.

There were bright spots, though.  Some travelers were so numb by the airport grind that they welcomed a chance to stop and chat with a benign stranger.  Many of them wore a hardened look upon approach, then brightened into dude-next-door humanity when engaged in conversation.  Most gave thoughtful answers based on their vast experience traveling.  Most had stories about air rage.   But it probably took an hour for us to get four decent interviews.  No women agreed to talk, a one-day extension of a lifetime of bad luck in that department.

At one point photog Mike Zakel and I agreed that I’d have been no worse off with “Hi, I’m Doug and I’d like to recruit you to join the Unification Church…”  Some folks react with a look of genuine horror when a stranger abruptly approaches and asks to chat.  Can’t say I really blame them.  Odds are, such folks are trying to strip of them of their money or time.  In the latter sense, I’m no different.