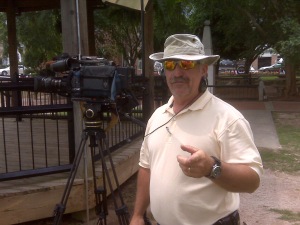 After the fall: Pete Smith, WXIA

Conventional wisdom suggests that political candidates campaign every waking hour.  The facts are different:  Political candidates in big markets spend much of their time raising money.  They do it personally, frequently on the phone, and as far from camera range as possible.

I don’t know what candidate Rob Woodall was doing last week when I called for an interview for a piece about the Republican primary in the 7th Congressional district.  But his staff said yes, he’d do an interview and no, there were no naturally-occurring campaign events that day.

Though delighted to schedule the interview, the absence of a campaign event gave us scant opportunity to shoot the requisite video of Mr. Woodall in his natural state.  This void led to the acrobatic and very temporary demise of WXIA photographer Pete Smith, as shown in the 32 seconds of video below. 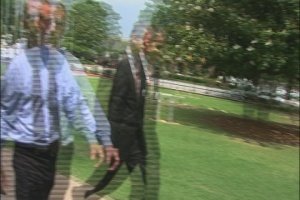 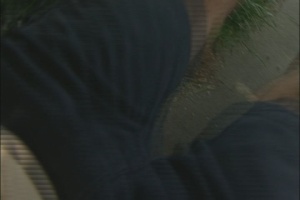 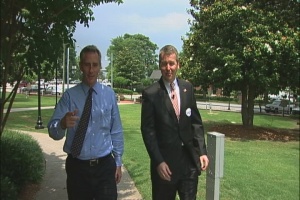 Smith was shooting some exciting motion pictures of Woodall and me doing laps around the old Gwinnett County courthouse.  In most of the shots, Smith was stationary, and Woodall and I made small-talk.  As I was explaining to Woodall why I’d left TV news in Washington DC in the 80s, Smith opted to stride backward perp-walk style, when he stumbled over a large decorative rock lodged alongside the sidewalk.

The video is a case-study in how to take a fall as a news photographer.  He fell squarely onto his back.  As you view the video, you see Smith’s legs splayed horizontally.  Immediately, you see him tilt the lens of his camera downward toward his belt.  This prevents the back of the camera from ever touching the ground.

At the same time, he arched his back and prevented (by an inch or so) the back of his skull from hitting the concrete.  Within four seconds, you hear him say “yep, we’re good,” as Smith realized nothing vital was impacted — or at least, nothing he felt at that particular moment.

Under normal circumstances, you’d hear the voice of a concerned reporter asking “are you all right?!?!”  The absence of this question is quite defensible here.   One would wait until the impact before asking such a question.  In this case, Smith short-circuited the impact by bouncing back up almost in one continuous motion.  His action answered the question before I ever got it out.

The “were you rolling” question was also quite defensible, given that I instantly conceived some usefulness for the video.

I’m still not sure how he bounced back upward so quickly.  But Smith was back on his feet, unassisted, within nine seconds.  Within twelve seconds, he had re-framed the shot into something usable.

Smith, who’s accustomed to looking under rocks at the state Capitol, is a fifty-something guy.  I don’t know how he felt the next day.  But for about 12 seconds or so, he was more than a guy shooting wallpaper video with a hifalutin TV camera.  He was a daredevil in the media circus.