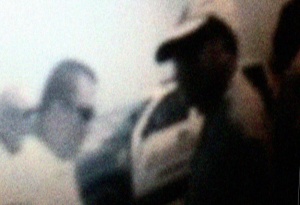 Monday, WAGA’s George Franco got arrested while covering the oil cleanup in Pensacola Beach.   He was charged with misdemeanor battery during an encounter with a BP subcontractor.  “Franco grabbed his arm and spun him around,” the police report says.  Read the reports by clicking the images below.

Photographer Chris Rosenthal rolled on a portion of Franco’s encounter with a BP subcontractor named Joshua James Mitchell.  WAGA hasn’t shown the video on TV or the web.

The video doesn’t show the contact explicitly.  Just outside of the frame however, one surmises Franco’s left hand touches the right arm of Mitchell.  Mitchell freaks out:  “Hey!  Get your hands off of me.  Get your hands off of me!”  Franco raises a hand to object.  “You touched me again, sir,” Mitchell says.  As this is happening, Mitchell is backing away from Franco.  Holding a WAGA stick mic, Franco continues to step toward Mitchell.  “Do not touch me again.”  Franco apologizes, but continues his mic-wielding pursuit. 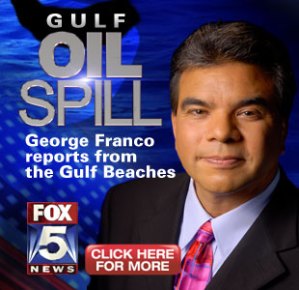 Franco was inside a staging area on a parking lot at Pensacola Beach.  There are trucks and buses and equipment on the lot, apparently used by workers cleaning up the oil mess.  Twenty seconds later, Mitchell calmly but firmly tells Franco repeatedly that he isn’t authorized to be in the staging area and needs to leave.

Franco’s presence in the staging area may be explainable.  Sure, a loud guy wearing a reflective vest is demanding that you leave; that doesn’t mean he has any authority to do so.  If the general public isn’t restricted from the site, then Franco and Rosenthal shouldn’t be restricted either.  I don’t know whether the area had any signage marking it as restricted.

Franco’s pursuit of a story about the cleanup workers is also understandable.  WAGA had dispatched them to the Florida panhandle late last week.  Franco was undoubtedly looking for a fresh angle on a story he’d already covered in several newscasts.

But the encounter is puzzling.  Certainly, Franco knew that BP subcontractors had been gagged by BP.  On one hand — a gag rule doesn’t necessarily rule out tidbits of commentary from those gagged.  If a reporter pursues it correctly — casual conversation works best for me, not bellicose pursuit with a hand mic — sometimes those who want to talk will find a way to do it. 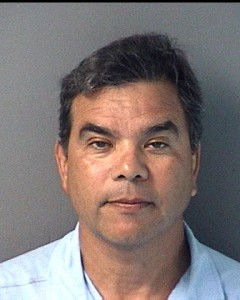 On the other hand, it seems pretty clear:  Once the guy erupts over the arm contact, the odds of engaging him for purposes of your TV story become almost nonexistent.  Although the “battery” had apparently already taken place, Mitchell continued to invite Franco to leave.  (The police report says Mitchell told Franco he was free to shoot the staging area from the exterior perimeter.)  Franco probably now wishes he’d accepted the offer.

Franco was arrested around midday Monday.  By 5pm  he was out of the Escambia County jail and doing live shots for WAGA.  NewsBlues reports that WAGA never mentioned Franco’s arrest; a coworker (of mine) reports that WAGA mentioned the arrest in their noon news Monday.  WAGA news director Budd McEntee told the AJC that Franco and the station deny the charges.

The video does not show Franco “grabbing” and “spinning” the subcontractor, as described in the police report (the report says Mitchell outweighs Franco by 100 pounds).  But it shows Franco pursuing Mitchell beyond a zone of comfort.   Editorially, I can’t figure out what Franco expected to get from him.  As a BP subcontractor, Mitchell wasn’t responsible for the spill or the mess on the beach.  “Are you gonna get on the beach and clean up?  There’s a bunch of tar balls!” Franco is heard asking, as Mitchell continues to order him away.  Perhaps the idea is to ask Mitchell how he feels about it.

Instead, we find out how he felt about Franco.