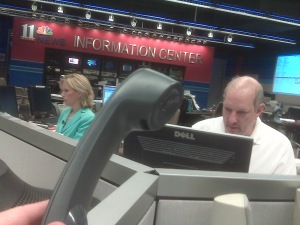 Here’s a helpful tip for fans of local TV news:  Want to get the attention of a human being working in a newsroom?  Call at 3am.

TV stations in major markets staff their newsrooms overnight whenever they’ve scheduled an early morning newscast.  At WXIA, that’s every night.  When you call a newsroom at 3am, the only competition you have is the stifling boredom that sometimes dulls the senses to even the most incessant ringing.  But odds are, somebody will answer.

At WXIA, that someone may be a guy named David Ries, who produces some of those early newscasts.   Ries reports that he took such a call Saturday morning:  “You know it’s going to be good when the phone call starts with ‘I’m not on amphetamines.'”

The caller informed Ries that he had a story that would “put your station on the map.”

“My house is alive and breathing and I can prove it.” 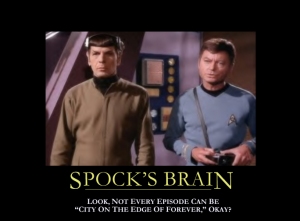 When I heard it, it brought to mind a classic Star Trek (TOS) episode, where an alien steals the brain of Mr. Spock.  She installed Spock’s brain into a “controller” to provide life support for an underground city.  When reached via communicator by the Enterprise crew, “Spock reports that… his medulla oblongata seems to be breathing, pumping blood, and maintaining temperature,” as described by memoryalpha.org “the Star Trek Wiki.”

Perhaps the caller’s home had indoor plumbing that was actually part of a living circulatory system, and an HVAC that was part of a pulmonary system.  If so, it would represent a significant bio-technological breakthrough.  Or, perhaps, something scary and horrible,  Either way, it had undeniable TV news potential if true.

(To my despair, Spock’s Brain is derided as one of the worst-ever episodes of Star Trek, “as hollow and nonsensical as any given episode of Lost In Space,” according to one reviewer.   Yet, I love Spock’s Brain. I love the premise; love the tension as they search for the disembodied brain; love the footwear on the aliens.  Love Leonard Nimoy’s performance as a brainless robo-Vulcan, and DeForrest Kelley as the performance-enhanced surgeon trying to restore it.)

Perhaps the home of the 3am caller really was alive and breathing.  It would be the story of the day, certainly, and maybe more.  Ries had dutifully recorded the caller’s phone number.  Presumably, we were invited to swing by anytime.

“I think we should check it out,” said photog Dan Reilly, straight-faced.

It makes perfect sense that anybody realizing at 3am that their house is “alive” and “breathing” would immediately look up the phone number of their favorite TV station and make the call.  We thrive on such tips, which regularly yield solid news.

And you overlook them at your peril.  The amphetamine-free guy in the breathing house could be on the phone with your competitor the next day — giving them the hottest news tip of the year, at 3am.

10 thoughts on ““My house is alive and breathing…””