Based on a detailed email from a tipster, we set out for Dahlonega last week to produce a story on the stink in the city’s water supply.  The tipster was very detailed:  The city had built a new reservoir, changed the intake for its water system, and the result was lousy-tasting water.  The city was struggling to fight it.  The tipster suggested that the solution — dumping copper sulfate into the reservoir to kill stink-producing algae — was also a health hazard.

“But I can’t be out front on it.  I’m strictly background,” said the tipster by phone. 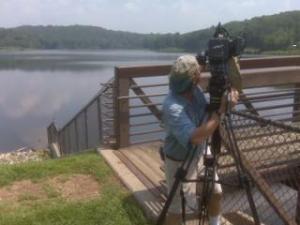 “Know anybody who can publicly express your concerns?” I asked.

The good news:  When Mike Zakel and I got to Dahlonega, we found the city manager just before he left city hall for lunch.  Bill Lewis described the water as having a “musty, kind of muddy smell.”  He said the city was trying to find the right chemical cocktail to kill the algae and restore the water’s taste.

I left with a sense of relief.  I thought getting a city official to talk on-camera about the problem would be the tough part.

Shows what I know.

We shot pictures at the reservoir, where I saw an actual bald eagle grab a fish, a first for me in Georgia.  It seemed like a good sign.   It wasn’t.

We still had no water customers talking about their experience with the water.  With great reluctance, we turned to the tried-and-true:  We camped out in the parking lot of a busy shopping center and approached random folks as they walked to and from their cars.

This is embarrassing, of course.  Folks are understandably wary when a sweaty middle-aged man approaches them with “Ma’am, I’m a reporter with channel eleven in Atlanta…”  I show them the flag on the wireless hand-held stick mic, which helps distinguish me from members of the Unification Church and others who way-lay strangers typically seeking charitable contributions.

“Do you live in Dahlonega?  Do you use the city water?”

I approached a dozen people.   Only one brushed me off with “I don’t have time.”  The others were very sweet, and each of them answered “no.”

This took place on a sun-drenched asphalt parking lot on the hottest day of the week.  I could feel my life force fading with each failure, in a setting where I expected at least a small measure of success.  It was an excruciating exercise.

Zakel and I concluded that oh-for-twelve was some kind of sign from God that we needed to try another approach at another location.

We decided to roll through a subdivision in the city.  This, too, was problematic inasmuch as it would involve knocking on random doors.  Nobody wants to do that unless they absolutely have to.

En route to the subdivision, we drove through Dahlonega’s scenic downtown, a place filled with tourist-town shops and such.  I’d avoided it initially because I surmised that the folks strolling through would be from somewhere else.

“Let’s stop downtown.  Maybe a business owner can help us.”

The manager of the fudge shop said:  Yeah, the water’s been a problem, but we can’t help you.  Try the folks at the sandwich shop.

The owner of the sandwich shop said:  Yeah, the water’s been pretty awful.  Try the pizza place.

The hostess at the pizza place said:  Yeah, the water’s been wretched, but the manager’s not here and we’re slammed.

These failures involved greater amounts of work:  Identifying a store, walking up to the counter (past customers), making a more formal introduction and explanation of our motives.  The quest for an interview with a Dahlonega water customer was becoming darkly comic, and not in a good way.

Zakel spotted a bar called “The Watering Hole.”  Drawn by the name, I entered.  The owner was there.  She agreed to let us in.  Within moments, a bartender / cook / brewer was designated spokesman for the bar.

The bartender even offered me a thimble of a new 11% Belgian ale he’d just brewed.  Maybe I looked like I’d needed it.

We finally left town at 3pm.  I was exhausted from the self-inflicted pounding I’d given my head against the proverbial wall.  Zakel graciously allowed me to snooze en route back to Atlanta.  Aside from seeing the eagle, it was the best part of the day.

I’d say I owe that guy a beer.