WXIA reporter Marc Pickard will retire Friday, concluding a 34 year career as one of the premier storytellers in Atlanta TV news. I asked longtime WXIA reporter Jon Shirek to write a few words marking the occasion, excerpted below.

For news to remain “news,” we will always need journalists to dig up stories of public officials committing acts of malfeasance and other offenses of self-centered stupidity at the cost of others. Our government “of the people” depends, in part, on the independent watchdogs of a free press. 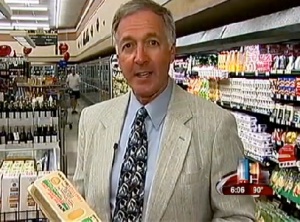 But we will also, always, need investigative reporters whose ammunition includes the spirit and skills of a Charles Kuralt and of a Marc Pickard, who know how to tell the real stories of real life. They serve up a hard-hitting report by gently getting inside the soul of a story . Marc’s gift has included being able to convince a succession of news directors that he will do his best work for them when they trust him and give him lots of room, and let him forge his own path, away from the rutted roads that many of the rest of us tread.

As much as Marc loves TV News and storytelling, he will, with little prompting, tell you with his serene but rascally and nearly always smiling and congenial spirit how much he has grown to hate being subject to the whims of the breaking news gods. Special projects, environmental reporting, health reporting, the years he spent focusing on the 1996 Summer Olympics in Atlanta, have been some of what he’s always loved to do. And in every role, on his own terms, he’s broken stories, he’s provoked change, he’s inspired viewers, he’s made a positive difference.

To the end, Marc is still the idealistic and eager cub reporter on his first assignment, in the body of a vet newsguy – scheduling 7am breakfast meetings; at his desk by 8 or 8:30 working the phone; entertaining any and all who stop by his desk. Then he’s at the morning meeting, and out the door.

Where are his thousands of news stories, now? Aside from the relative few that are preserved here or there, it’s left to science fiction writers to speculate about all those TV news stories riding forever at the speed of light on TV signals that drift into other galaxies, maybe for our neighbors to reassemble and see someday as they study what kind of planet is this Earth. And from a man named Marc Pickard, they’ll see the work of a barnstorming Shakespeare skywriting sonnets in the wind that were already wisps of memories by the time he began his next assignment, day after week after month after year, and always, always, having a grand time.

So here are five of Pickard’s news scripts; again, I picked them at random.

A good TV news script is not always self-contained on the printed page, and may not even make complete sense, it needs the video and sound to complete the “package.” Think of these few examples, though, as Pickard “Unplugged.” Notice the notes he writes to the photographers/editors suggesting how he thought his words might fit with what they’d shot.

I would be the first to say: journalism will diminish without Marc Pickard digging, reporting, interviewing — gaining the confidence of people who bare their hearts and souls to him eloquently — meticulously logging every second of every tape, calling back, fact-checking, letting his non-fiction tales emerge on their own, naturally, from seed to blossom, in a day… after day after day. I can’t imagine this place, this city and state, without him finding and telling us his stories.

I could tell you how one Sunday long ago, during Marc’s WSB spot-news life, I witnessed him wearing a tux (!) covering a twelve-hour police SWAT and FBI hostage crisis in downtown Atlanta. He always wore his beeper (this was 1981, way pre-cell-phone), and he had it on with his rarely-worn tux Saturday night, and it went off. He was so focused on the story I don’t think he ever realized he looked like a penguin in the Sahara. No one else but Marc in that unexpected situation could have pulled off Fred Astaire at a crime scene with such understated flair.

I could tell you about the amazing work he and Photographer Mike Zakel did for most of a decade covering the Atlanta Committee for the Olympic Games. WXIA was the “official” Summer Olympics TV station in Atlanta in ’96. More than once, Marc heard second and third hand that competitors were discounting anything Marc aired because he and Mike were simply receiving their scoops on a silver platter. To this day he has never said a word in his own defense. The reality is that ACOG was often too disorganized and overwhelmed to bother much with the likes of us or anyone else in the local news media. Marc and Mike just kept digging, and striking, excuse the pun, gold, on their own with no help from any “official” relationship.

But a few additional years of doing general news stories, often the same ones, over and over again – same song, different verse — he said, wore him down. So he found a way to retire from that type of local news reporting a long time ago; he found a way to pursue the work he loves by doing more of the types of stories he hoped could impact people’s lives for the better.

Marc loves baseball. He loves Braves baseball. He had season tickets long before the Braves began their winning ways in ’91. He held on to those tickets when the Braves moved from Atlanta Fulton County Stadium to Turner Field. These aren’t just seats somewhere at the ballpark. These are behind-the-Braves-dugout seats. As you walk down, down, down the steps toward the field, Walter greets you and escorts you to those seats. You can smell the lawn, hear the whoosh of the fastball, practically talk to the guys as they warm up to bat. Every once in a while when Marc and Jeannie can’t go, he lets go of his tickets, and once in a while I’ve won the scramble to grab ‘em up. That’s how I know.

Marc’s nickname in the newsroom, and good sport that he is, he’s never complained, is “EarthWorm.” Or, to his closest tormentors, “Worm.” Randy Waters is one of our sports guys who decide someone’s nickname.  Randy came up with Marc’s soon after Marc arrived, because Marc started as the environmental “EarthWatch” reporter. And through all his many other assignments, EarthWorm he’s remained and will always be.

There’s been some talk among the reporters in the newsroom, with Marc eavesdropping surreptitiously as any self-respecting journalist will do, about what will happen to his desk. It’s valuable real estate — News Central for anyone who wants to keep up with what’s going on in our newsroom. It’s in the cubicle cluster consisting Marc, Jaye Watson, Duffie Dixon, Matt Pearl, Kevin Rowson, Julie Wolfe, Bill Liss, with Paul Crawley, Donna Lowry and Jennifer Leslie and the C.I.A. guys Ross and Shawn nearby. More importantly, the desk is the one that’s closest to the office of Marlene Henderson, one of Marc’s best friends, fellow Braves fan, and our newsroom protector whose administrative title does not hint at the millions of little but lifesaving miracles she constantly performs for the rest of us knuckleheads, including listening patiently and sympathetically to anyone who needs a patient and sympathetic ear.

I’ve said we should reserve Marc’s desk, keep it as it is and unoccupied, complete with some of his clutter that he could will to us, and, on top of it, place a small sign engraved, of course, “Gone Fishing.” I’m holding out hope that he’ll get the itch to come back to that desk and do some freelancing in between all those fishing trips.