Budd McEntee is an old-school newsman.  For years, he had a portrait of Walter Cronkite on the wall of his corner office at WAGA.  He was passionate about being first with important stories.  He loved breaking news, which he believed had a crowd-pleasing quality for the audience.  He was devoted to overturning rocks and exposing secrets.  He was the most competitive guy I’ve ever known in the news business.

McEntee was one of the best newsmen I’d ever known.  He was also the worst boss I’ve ever had.

McEntee became news director in 1991.   McEntee added Good Day Atlanta, which became one of the station’s biggest moneymakers, meriting expansion to the five-plus hour morning block it occupies now.  When he started, WAGA had two and a half hours of news per day.  It now has ten.

With that, McEntee became a very busy man, increasingly immersed in what used to be called paperwork.  He kept sporadic track of the day-to-day doings of his newsroom, and became a guy who reacted mostly to whatever he disliked.  It made him an increasingly caustic presence.

McEntee was obsessed — and I think that’s the correct word — with WSB.  The competitor in him wanted to catch WSB in the ratings, but it never happened.   When WAGA and WSB had concurrent newscasts — as they do at noon, 5, 6 and 11 — monitors in WAGA’s newsroom typically were tuned to WSB.  Frequently, McEntee and his managers knew WSB’s content better than the content on their own station.

McEntee wanted to out-cover WSB on big stories, and wanted whip WSB with important scoops.  Frequently, his staff succeeded.  Just as frequently, WSB succeeded.  Much of that is a function of a key fact that McEntee couldn’t overcome:  WSB is a large-budget operation.  WAGA’s web site lists 17 general assignment reporters.  WSB’s site lists 25, giving it almost fifty percent more firepower on day-to-day news.  WSB has state-of-the-art equipment, and more of it than anybody else in Atlanta. 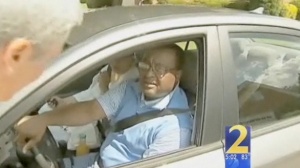 Yet when WAGA got beaten on a big story — as happened in March, when WSB’s Jodie Fleischer got a jump on the indictment of DeKalb School Superintendent Crawford Lewis — McEntee had a tendency to come unglued.  That night, after seeing Fleischer and Richard Elliott with elements his station lacked, McEntee ordered dayside staff to work double shifts.   There was no journalistic reason to do it.  McEntee did it because he was angry.

There are similar stories that are too numerous to count, incidents that went well beyond a manager’s legitimate interest in holding his staff accountable.  When competitive issues arose that were systemic or managerial or just plain dumb luck, McEntee regularly responded by irrationally punishing the staff.

I can’t help but compare him to Ellen Crooke at WXIA.  She has a newsroom full of reporters who would happily jump off a cliff for her.  McEntee may have had some of that devotion in his earliest years as news director, but it didn’t last long.

Morale at WAGA stayed in the dumps during the last ten years of his tenure, and deteriorated with each successive year.  McEntee hired a lot of talented people, but then drove many of them away from the TV news industry.  It’s an unfortunate part of his legacy.

McEntee deserves credit for keeping WAGA competitive while the WSB juggernaut gained strength (and continues to do so, now that its alliance with the AJC is official and active).  McEntee’s protection of  WAGA’s investigative unit, at a time when bean-counters wanted to slash costs, showed his solid journalistic (and marketing) instincts.  The I-Team is assuredly taking McEntee’s departure with a great deal of unease.

But not so the rest of the staff, one of whom e-mailed me to say s/he was “looking forward to work today for the first time in… years.”

McEntee had a human quality that he seemed to increasingly suppress.  I’ve seen him do many kind and generous things.  Word has been that he and McHugh are gone, in part, because they resisted Fox’s desire to cut staff.   Yet most of the staff will remember him as a bully who took the satisfaction journalists get from their profession, and wrung it dry.

TV news already faces plenty of challenges that threaten its very survival.  If it’s going to succeed, it will need personnel who are motivated by something more than a paycheck.  One can only hope Budd McEntee was a one-of-a-kind leader.  He was great at journalism.   He was pretty lousy with journalists.