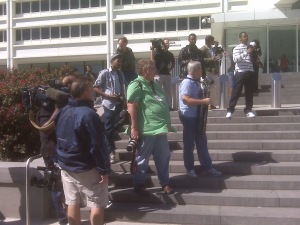 I’d expected a crowd.  Instead, when we arrived at the Richard B. Russell Federal Courthouse for the probation revocation hearing of the rapper known as T.I., there were four people waiting.

WXIA photog Dan Reilly and I got there about 75 minutes ahead of the scheduled 2pm hearing.  Truth is, I kinda figured that T.I., whose real name is Clifford Harris, was already in the courthouse.  He had four well-known Atlanta lawyers from three different firms on his defense team.  Given the fact that they’re all paid by the hour, the advance briefing could have taken days, much less hours.  And it was likely already underway somewhere inside the 23 story courthouse building.

But these folks were staked out at the rear of the building.  The actual main entrance was on the opposite side, and there was another at the basement level.   WXIA had sent another photog to stake out the lower entrance.  Reilly and I walked to the front.  The four others followed.

As we arrived in front, a woman in a serious suit passed us.  “Just waitin’ for T.I.,” I said.  “He’s not here yet,” she answered with authority, as if she actually knew what she was talking about.  “2307,” she added, correctly giving the courtroom number.  Then she ducked into the front entrance.  She’d said what I wanted to hear,  whoever she was.  Yet I was only slightly encouraged.

There was plenty of other news Friday; getting a moving picture of T.I. entering the courthouse apparently wasn’t a Code Red priority for anybody except a couple of paparazzi.   A proper stakeout takes a commitment of resources:  At least two photogs, who probably should have begun their stakeout at 8am at both entrances.

Except as a piece of photojournalism, the news value of the shot was negligible.  We all know what the guy looks like.  He was unlikely to say anything newsworthy, if he said anything at all.

And yet — it’s the kind of shot you’d hate to miss, especially if a competitor has it.  As we stood outside the front of the courthouse, other TV stations and freelancers showed up.  Even a CNN crew made the four-block walk to the stakeout.

At this point, folks with cameras just camped out wordlessly next to us.  They appeared to simply assume that, because a scrum was slowly enlarging outside the courthouse, there must be a good T.I.-related reason for it. 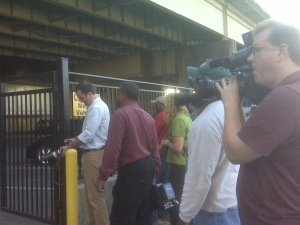 By the time I abandoned Reilly  and went inside, about thirty people were waiting with him.  When I got to the 23rd floor courtroom, Clifford “T.I.” Harris was sitting on a bench with his attorneys.   He apparently managed to enter the building without being photographed, probably hours earlier.

Since we’d missed T.I.’s entrance, it became essential to cover his exit.   Local TV stations sent extra photographers to cover the basement exit, which sits in an industrial gulch below street-level, lodged within a parking lot, a loading dock and several sets of railroad tracks.

After the hearing ended, I played a hunch and told Reilly I was going downstairs.  T.I. had just lost his bid to stay out of jail.  Losers in the courtroom don’t typically hold news conferences on the steps of the courthouse; they usually slink out of the basement.

WXIA photog Stephen Boissy had seen T.I.’s wife exit downstairs moments before I arrived.  After I’d gotten there, his attorney Ed Garland exited.  “I’m not going to make any comment…” he began before telling the assembled cameras how disappointed he was, and answering a follow-up question.

A few minutes later, Garland drove his BMW up to the exit door, sixty feet from where the US Marshals had allowed the downstairs cameras to assemble.  T.I. exited the courthouse door, opened the passenger door, then stopped.  He waved to some people, standing there long enough for photogs to zoom in and focus, then slowly ducked into the car.  “Mr. Harris, could you stop and answer a question?” I hollered halfheartedly.  Upstairs, the majority of the T.I. stakeout was recording a news conference by the prosecutor.

Harris ignored my question.  A few TV photogs sprinted ahead of the car to record the vehicle’s exit.  Boissy’s video image of Harris lasted just a few seconds, the end product of about six man-hours of stakeout.

During her confirmation hearings, the newest Supreme Court justice Elena Kagan suggested that cameras should be allowed to cover SCOTUS arguments.  If this happened, it could allow cameras into federal courtrooms.  Overturning this Warren-era restriction is long, long, long overdue.  Thanks for asking.