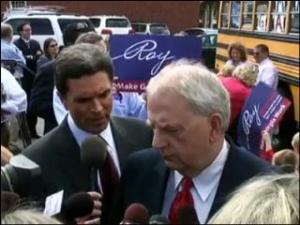 Political campaigns aren’t held to any standard of truthfulness, except by other political campaigns or the news media.  Likewise, news organizations have no law or regulatory panel that scrutinizes and enforces veracity.  In that sense, they have a lot in common.

But campaigns and news organizations have very different, market-driven standards of truth.   One could argue that any news organization that routinely distorts the truth would lose readers or viewers.  (But then, one would have to reshape the argument to account for the popularity of the Fox News Channel.)

You don’t see local news organizations doing it because they have standards and lines they’re unwilling to cross.  Don’t laugh.  It’s true.

Political campaigns, on the other hand, do it all the time.  Lt. Gov. Casey Cagle is currently running a TV ad claiming that he “protected educational funding.”  It appears to overlook some $600 million in education funding cuts the legislature enacted this year.  Yet his campaign web site cites certain facts which, it says, back the claim.   It’s classically Orwellian, but it’s the currency used by campaigns of both major political parties.  The truth is molded to fit a storyline.   And because somebody always wins the election — typically, irrespective of their relationship with the truth — the campaigns keep doing it, election after election.

So it may have been natural for Roy Barnes to have taken a piece of news-style footage, and enhance it with made-up audio, for a TV ad.  Likewise, it was apparently natural for Nathan Deal to create, for a TV ad, newspaper headlines and quotations that didn’t exist.

The Barnes footage came from Jim Galloway’s blog, apparently shot by a campaign operative following a debate last week at The Temple.  In it, Nathan Deal rapidly exits the building while a reporter barks questions that Deal ignores.  On the video, y0u  hear the voice of only one reporter.

Barnes’s campaign got hold of the video and “sweetened” the audio, in a way that gives the impression that numerous reporters were hollering at the elusive Deal.  Then he put it on TV in an advertisement.  This resulted in a story by Jon Shirek on WXIA comparing the two pieces of video (I can’t embed it here, for some reason), followed by an enormously entertaining give-and-take between Barnes and Jeff Hullinger on the same topic.

News organizations do shape truth.  We call it “editing.”  For example, a candidate may give a convoluted answer to a question (or a reporter may ask a convoluted question), and the slick TV news editor will eliminate the awkard verbiage and retain the material that conveys the meaning.   We also add audio in narrative voice tracks.  On rare occasions, I’ve seen questions or natural sound enhanced.   That’s mostly against the rules (see above, “don’t laugh”).

Barnes added voices and questions that weren’t asked in that piece of footage.    Barnes told Hullinger that the audio didn’t change the storyline:  Deal refused to answer questions.  But it certainly made Deal appear to be cowardly, rather than a guy who might have been in a hurry to get to his next event (having answered questions for sixty minutes in a debate moments earlier).  It also fails to take into account the fact that Deal answered every question thrown his way at an event the following day.

But Deal can’t bellyache too much.  By paraphrasing a comment from Barnes’s spokeswoman, then turning it into a made-up newspaper quote, Deal’s campaign is guilty of exactly the same kind of distortion.   None of this will stop each from indignantly accusing the other guy of lying.  How dare he.

On November 2nd, one of these guys will get elected Governor of Georgia.  And the next round of campaigns will observe whatever worked for the winner, and use the same tactics again.