Update: It appears they killed my segment Sunday due to  — weather, maybe?

Despite her better judgment, the bosslady has decided to allow a variation of this blog to appear in a WXIA newscast.  Depending on my ability to generate content, the whims of management, the numbers, the research etc., it could be a regular feature on 11 Alive’s Sunday morning news, which is broadcast for an hour at 9am. 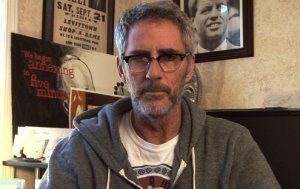 The piece is essentially an on-camera rant, delivered as is if by the mutated offspring of Lewis Black and Andy Rooney.  The piece is self-shot in the office that has functioned as LAF HQ for lo these nearly three years.  There will be graphics to illustrate points.  But mostly, it’s yours truly runnin’ his damn mouth again.

I shot two different versions:  One at the end of a hirsute period concluding a three-week paternity leave, and one version at another time.  Tune in at 9am Sunday and find out which one got the green light!