Thank goodness for Wikipedia.   It’s an essential resource when your TV station has made a commitment to devote much of its newscast to an unplanned, live event — yet your news team has run out of things to say about it. 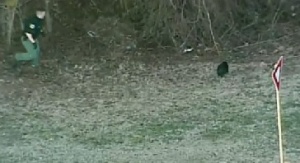 This was the corner into which an otherwise-respectable Atlanta TV station backed itself when, one fine day in January during evening rush hour (and its evening two-hour block of news), a Vietnamese Pot-bellied pig was spotted alongside I-75 in Cobb County.  A chase ensured.  Helicopters and live trucks were dispatched.  It was, in some quarters, a “wow” moment.

I didn’t see the station’s extended coverage.  My friends who observed it say it went on for forty minutes and was a classic example of local TV news at its most overwrought.

My Suspicious Package parody is not intended to mimic any actual local TV news folk.  The anchor voice is a generic basso profundo; the hairpiece is on loan from Big Mike, with thanks.  The “field” material was shot by Richard Crabbe in the parking lot behind WXIA/WATL world headquarters.

I now realize that my follicular shortcomings have been the biggest hindrance to my quest to become a highly-paid local news anchor.  Like many people, I find the male hairpiece to be mostly laughable.

You probably already know this, but this point is worth restating.  TV reporters aren’t necessarily welcomed wherever they go.  Here’s an example from an encounter I had last month at the state capitol.  It’s complete with a video re-enactment, embedded at the bottom of this post.

First, let’s set the scene.  I’m producing a story that we in the news business call a “followup,” or an “update.”  It’s a story first reported days or weeks or months ago, revisited by your friendly neighborhood TV news professional.

Now a lot of folks may think my staff sets up this stuff while I apply makeup and hairspray.

I ain’t got no staff. I gotta make it happen.

I go to the office of a member of the Georgia General Assembly, a behind the scenes player I’d never met  before.  I’m in his office because he hasn’t returned my phone calls.

He’s standing in his office.  I introduce myself, and he greets me with a look that can only be described as a sneer.

“How can I help you?” he says with sneering contempt.

I explain to him that I’m pursuing a story updating a situation that made a lot of news in his district several months ago.  My pitch is persuasive.  My logic is flawless.

He retorts with the following:

“Why you wanna dredge up that mess again?  We ain’t interested in that no more.  That’s in the past.”

Then he follows with this classic.

“Why, it must be a sloooow news day.”  And then he chuckles heartily.

Why does he chuckle?  Because that line “it must be a slow news day” is widely regarded as the cleverest and most dismissive thing you can say when a persuasive and flawlessly logical newsman comes a-calling to pursue a story.

I left that guy’s office without even asking him for an interview.  Instead, I did the story without his input.  And I left his office with every bit of the respect I had when I walked in.

This post has been updated and corrected to reflect the fact that WSB-TV also blurred the photo of Antonio Cardenas-Rico.

I covered the stabbing deaths of two children Thursday, and immediately faced one of those journalistic conundrums.  Perplexing as that was, it was compounded by the fact that my competitors handled it completely differently than I did.

Gwinnett police arrested a guy early Thursday morning.  They announced the arrest, and a news conference in a press release.  Within the press release was this plea:  Please don’t publish / broadcast the mug shot of the suspect.

Thankfully, I don’t cover crime much anymore.  But back in the day, we took requests like this very seriously.  As in most such cases, Gwinnett cops told us that they needed to use the mug shot in a photo lineup.  By publishing the mug shot, they argue, the value of the photo lineup — presented to witnesses to verify the identity of the bad guy — becomes worthless.

Here’s the problem:  Police overplay this “we don’t want you to harm the investigation” card constantly. They use it as an excuse to withhold basic information about crimes.  Lately, cops have used it to withhold the identity of those arrested — public information which falls within the “right to know” realm of a free society.  “Because the investigation is ongoing, we can’t answer” basic questions, they say.  In so doing, they overlook the fact that every criminal investigation is “ongoing” up to the moment that the alleged bad guy’s case is adjudicated.  It’s a blanket excuse for cops to clam up.  And reporters rarely challenge it.

Nobody in the news media wants to harm a criminal investigation.  When a case is less than 24 hours old — as was the case when Gwinnett police arrested Antonio Cardenas-Rico Thursday morning on two counts of murder — the “you’ll harm the investigation” argument has much more credibility. 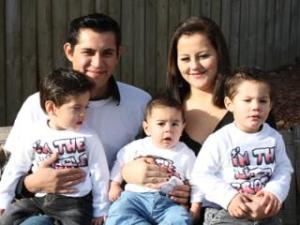 Amazingly, much of the Atlanta news media made a swift decision to disregard Gwinnett County’s request to withhold the image of Cardenas-Rico.  WXIA and WSB-TV were, to my knowledge, the sole exceptions.

Gwinnett PD hurt its own case by misleading reporters who asked if Cardenas-Rico would have a first-appearance in Magistrate Court Thursday.  There would be no appearance, a spokesman said emphatically.  To their credit, WSB/AJC staffed the 1pm Magistrate court session anyway.  Sure enough, Cardenas-Rico showed up, along with Gwinnett cops.  WSB got the only video of the court appearance, and the AJC got photos.  Once that happened, the AJC didn’t hesitate to use Cardenas-Rico’s image.  WSB hesitated.

Perhaps the AJC felt that the public court appearance, and Cardenas-Rico’s mugshot on the Gwinnett Sheriff’s website, put the suspect’s image irretrievably into the public realm.  Perhaps they felt the police department’s duplicity killed the credibility of its request to withhold the image.  I might have made the same arguments.

I felt a counter-argument was equally strong:  The image of the bad guy doesn’t give the public any useful, vital information.  Our free-society interests aren’t served by going all freedom of the press! on a mug shot. Yes, the public has a fascination with mug shots — and in this case, it has an understandable interest in seeing the alleged face of evil.

But I didn’t want to be the media outlet that undermined an investigation into the murders of two tiny children.  And I didn’t want to do it simply because my competition made a decision to do it.  At least, not right away.

Knowing that the AJC was showing the mug shot on its web site, I called the Gwinnett police spokesman late in the afternoon.  I squawked at him about his handling of the court appearance question.  He continued to plead his case to withhold the mug shot.

The blurred mug shot of Cardenas-Rico

His case wasn’t very compelling, but he was emphatic.  When police officers aren’t acting like dipshits — and Gwinnett’s duplicity seemed to be a communication error as much as anything —  I’m inclined to give them the benefit of the doubt, and yield to their professional judgment about crime fighting.  They’re the experts on that stuff, not me.

(And it turned out the investigation was still in a very dynamic state.  By Saturday, police had cleared Cardenas-Rico and arrested another suspect.)

Based on my recommendation, WXIA chose the route of caution and blurred the photo of Cardenas-Rico.

A day later, I had a phone conversation with a Gwinnett investigator who said:  I don’t know why y’all did that.  It was up on the AJC’s site all day.

Suspicious Package had a hiccup two weekends ago when I produced a piece that was long on earnest effort, but woefully short on humor. It was a solid concept, poorly executed:  Give used-car salesman treatment to a TV live truck.

Though some of my coworkers have tried to console me by suggesting the piece was still interesting, it looks completely flatfooted. I post it below, and welcome your abuse.

NO Parking, posted with vodpod

The good news: I recovered a bit with another piece (obviously shot the same day by John Samuel, a guy whose talent was badly underutilized on this shoot). This piece explores a theme that I expect to tap frequently: The love / hate relationship between the news media, and pretty much everybody else, including our viewers / readers / listeners.

As we shot the piece, the adorable Errin Haines stopped to chat. Slurping a big-gulp of tea, the Atlanta AP reporter begin to riff on the exact topic I was exploring in this particular Suspicious Package segment.  I obviously need to find an infusion of charm in these pieces.  Perhaps I can recruit Errin as a regular sidekick.

If only she’d shown up for the live truck segment.  She might have redeemed it too.

As a young man, I had a journalistic mean streak.  When I produced stories that had touches of the absurd, I sometimes beat those absurd qualities with a sledgehammer.  The results were occasionally  entertaining (oh– plus informative.  Can’t forget that).  But the meanness ate away at my sense of  fairness.  It was disrespectful.  It could be overpowering.

In particular, I recall producing a piece about Claxton Fruitcakes.  The manufacturer in Claxton invited me to watch them make fruitcakes.  I then produced a piece with a viewpoint that highlighted folks’ disdain for the product.  It was amusing but it wasn’t very nice.

I produced a number of similar pieces.  There’s a mortuary school somewhere in DeKalb County from which I’m banished, pretty sure, because of a story I produced as a young man that was less-than-respectful.

When the lady with the twenty-inch fingernails made herself available, I was overjoyed.  And the old mean streak began to rear its head.  Fortunately, the woman and I had trouble connecting.  This gave me a few days to ponder my approach to the story. “She considers it a gift from God,” her daughter had told me.  I concluded that I needed to suppress the mean streak and play it straight.

It helped that the woman, Jazz Ison Sinkfield, was charming and ingenuous.  Her daughter, Precious and her grandson, Suburban, clearly adored her and respected her “gift.”

It seemed reasonable to ask respectful, snark-free questions (such as “if God had fingernails, would they look like this?”).  I strove to avoid too-clever turns-of-phrase in the copy.  It seemed reasonable to let the video and interview material speak for itself, with Richard Crabbe’s judgment-free editing.  The story was eye-catching enough.

It’s reasonable that the casual observer might conclude that “this whole thing is such a mess of journalism and humanity,” or suggest that Jazz’s gift is “a sideshow attraction.”   I might have even done that myself, as a much younger man.

But not now.  I’m not a young man anymore.