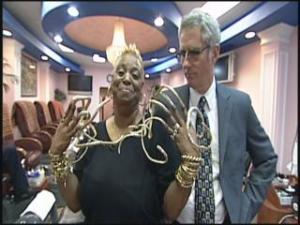 As a young man, I had a journalistic mean streak.  When I produced stories that had touches of the absurd, I sometimes beat those absurd qualities with a sledgehammer.  The results were occasionally  entertaining (oh– plus informative.  Can’t forget that).  But the meanness ate away at my sense of  fairness.  It was disrespectful.  It could be overpowering.

In particular, I recall producing a piece about Claxton Fruitcakes.  The manufacturer in Claxton invited me to watch them make fruitcakes.  I then produced a piece with a viewpoint that highlighted folks’ disdain for the product.  It was amusing but it wasn’t very nice.

I produced a number of similar pieces.  There’s a mortuary school somewhere in DeKalb County from which I’m banished, pretty sure, because of a story I produced as a young man that was less-than-respectful.

When the lady with the twenty-inch fingernails made herself available, I was overjoyed.  And the old mean streak began to rear its head.  Fortunately, the woman and I had trouble connecting.  This gave me a few days to ponder my approach to the story. “She considers it a gift from God,” her daughter had told me.  I concluded that I needed to suppress the mean streak and play it straight.

It helped that the woman, Jazz Ison Sinkfield, was charming and ingenuous.  Her daughter, Precious and her grandson, Suburban, clearly adored her and respected her “gift.”

It seemed reasonable to ask respectful, snark-free questions (such as “if God had fingernails, would they look like this?”).  I strove to avoid too-clever turns-of-phrase in the copy.  It seemed reasonable to let the video and interview material speak for itself, with Richard Crabbe’s judgment-free editing.  The story was eye-catching enough.

It’s reasonable that the casual observer might conclude that “this whole thing is such a mess of journalism and humanity,” or suggest that Jazz’s gift is “a sideshow attraction.”   I might have even done that myself, as a much younger man.

But not now.  I’m not a young man anymore.