During Ronald Reagan’s first term, I worked at KMTV in Omaha.  I still have a lot of rose-colored affection for Omaha.  It was a competitive three-station market.  We had one live truck, a helicopter and a twin-engine plane owned by May Seed and Feed, which also owned KMTV.  They took news pretty seriously. 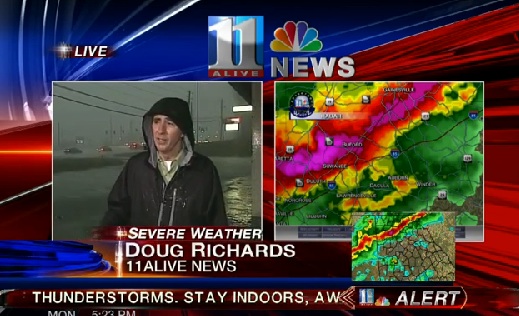 Nebraska had tornadoes and thunderstorms and blizzards.  Our weather guys would show the storms coming, with appropriate  crawls and cut-ins.  When there was damage, we’d  cover it afterward.   I never once found myself outdoors, in a live shot, in anticipation of bad weather.  Even when eastern Nebraska was in the process of getting a foot of snow — or staying below zero for a week straight — we mostly treated it as part of the wallpaper of daily life in that part of the country.  A photog would get a weather shot, and the meteorologists would handle weather coverage.

At some point in the late 80s, somebody figured out that “households using television,” a Nielsen measurement, shot up when bad weather was coming.  TV stations strove to grab those eyeballs by putting its field crews into the path of oncoming weather.

I used to gripe about this practice, with tedious frequency.  I quit griping this week, forever.

I now embrace it for two reasons:  A)  It’s awesome.  B)  It’s like the weather.  Complain all you want, but you can’t do anything about it.