Charlie Sheen was in town.  It got Big Deal treatment from WXIA and competing Atlanta TV stations.

Prior to his stage show at Atlanta’s Fox Theatre, Jaye Watson and photog David Brooks found Sheen at Georgia Tech’s ballpark, where Sheen was taking BP with Tech’s baseball players.  It turned out to be the scoop of the day.

I didn’t actually see Watson roll her eyes when she got assigned to Sheenwatch Thursday dayside.  The show was a nightside story.  We knew Sheen was in town.  He’d done a radio interview.  Watson figured out that a local strip club was doing some kind of Sheen lookalike contest.  She pondered interviewing a stripper.  It was thin gruel.

Our laughably young and arguably brilliant Manager of Content, Ben Mayer, began noodling around the internet.  He searched Sheen’s name, plus “Atlanta” on Twitter.  A post emerged that said:  At a secret location right now. Watching Charlie Sheen play baseball.  It was written by a WGST radio talk show host named Rusty Humphries.

Mayer continued to noodle, and found that Humphries had included a geotagging component in his posts.  The geotag didn’t emerge until Mayer clicked the Tweet, which showed a map, plus longitude and latitude.  It put the post at I-75/85 and roughly 7th Street.  Mayer looked at the map, and saw Russ Chandler Stadium about two blocks to the southwest.  He called Watson.

She and Brooks showed up at  the stadium and heard the sounds of batting practice.  They walked toward the dugout.  A Georgia Tech Sports Information PIO intercepted them and told them they had to leave.  He escorted them to the gate, and locked them out.

Watson asked him if Charlie Sheen was there.  He said he wasn’t.

But the behavior was sketchy.  If Sheen’s not here, why can’t we watch batting practice?  The PIO began belittling the crew for showing up there based on a Tweet. 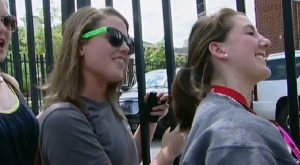 Once outside the gate, a Tech security guard showed up.  The guard confirmed what the PIO wouldn’t:  He was there to keep the Sheen BP orderly.  Watson and Brooks waited with the guard for an hour.  Thanks to Twitter and text messages, the crowd outside the gate grew.  It included a gaggle of female admirers who wanted to invite Sheen to their sorority party that night.

Sheen came to the gate, and Watson’s interview with him was very casual, yet newsy and appropriate to the occasion.  If she was tempted to lapse into Sheen-speak, questioning him about tiger blood and such, she completely resisted.  She let the Sheen weirdness emerge naturally.  To my knowledge, it was his only Atlanta TV interview that day.  The raw interview is embedded below.

As Watson and Brooks departed Russ Chandler Stadium, the obfuscatory Tech PIO said:  Well, it all worked out in the end, didn’t it?

No thanks to you, pal.   Georgia Tech Assistant Director of Athletics for Media Relations Dean Buchan, who gave a first-hand account of Sheen’s BP heroics to the AJC, did not respond to an emailed request for comment.

Users of Twitter may wish to check their preferences and see if they’re geotagging, especially when tweeting about “secret” locations.  The rest of us can ponder why any PIO would feel compelled to dissemble in order to provide cover for a man who clearly craves media attention.

The good news:  WGST is apparently paying local talk show hosts again.  And Watson, who’s much better known for her thoughtful writing and storytelling skills, is a hell of a tabloid reporter.  Especially with Mayer’s help.

Thursday, a woman from Bartow County who’d been missing six days turned up alive.  She’d disappeared on her own, leaving her husband and five children.  The family was in debt.  When she materialized, she told authorities she wanted her whereabouts kept secret.  They obliged.

Moments after the news conference announcing those scant details, a producer for one of the traditional broadcast networks casually asked me:  What do you think will happen next?  Will she see her husband or children again?  Her face was bright with genuine curiosity.

I stammered, then decided to uncloak my undiplomatic answer:  “I’m pretty sure I really don’t care.”

It’s not that I am heartless.  Clearly, this family has problems  It now undoubtedly faces  months or years of issues, therapy, legal bills or worse.

I went on to posit that this family, sadly, is not much different than the roughly half of American marriages that end in divorce.  Not to say that Wazineh and Abed Suleiman are headed straight to divorce court.  But every single day, hundreds or perhaps thousands of spouses make the decision to bail on their marriages.  They never make news.

This made news for several reasons:  Her sudden disappearance had the whiff of foul play, launching a public criminal probe.  She made the unfortunate choice to bail without telling anybody what she was doing.

And she has a pretty smile.

Her re-appearance ground the criminal investigation to a halt.  It was already clear before Sheriff Clark Milsap said it:  This was now a personal matter, a domestic issue that no longer fell into the public realm.  My job was to report her re-emergence on WXIA, then move on.

I saw two network crews there, though.  A guy from CNN was doing live shots.  The national interest in this local story took me aback.

Two days later, this was the top story on Yahoo news.  Wasineh’s Suleiman’s smile was the eye-catching artwork.

I should watch more TV, I suppose.  I’m vaguely aware that network magazine shows routinely produce “real life mystery”-type stories that dig into the details of folks’ private lives.  A colleague told me last week that morning shows like Today and Good Morning America do the same thing.  The pretty smile of a female central character is frequently the common denominator.

If Wazineh Suleiman’s face wasn’t camera-friendly, what are the odds there would have been this kind of interest?

I realize it’s my job to tell interesting stories.  Presumably, these entities have learned something that I haven’t:  These stories are still interesting, even after it’s clear no crime has been committed.

When I started in the news business, “interesting” wasn’t enough.  There had to be a better reason to dig into the personal lives of people who hadn’t sought publicity or done something criminal.  The Suleiman case was a grey area; Abed Suleiman had publicly pleaded for his wife’s return.  Once he realized the extent to which his family life had unraveled, he stopped talking.

But the story didn’t stop, apparently. 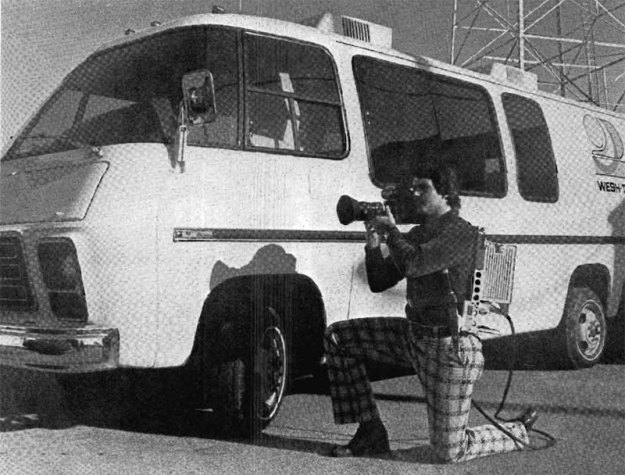 Following Tuesday’s storm, a resident of Lilburn reported that two men posing as reporters burglarized her house.  They showed up at her home, identifying themselves as news media personnel.  The woman obligingly gave them a tour of her storm-damaged home.   Hours later, the home was burglarized.

Here are five ways to check for the difference between a TV crew and a burglary crew.

3.  Look for fashion trends.  If their clothing is au courant, if it would look appropriate in the latest catalogues, then be very wary.  Though there are notable exceptions, very few people in the news media wear clothing that is actually fashionable.

2.  Give them a current events quiz.  Ask them to name Georgia’s two US Senators, or the Lieutenant Governor of Georgia.   If you don’t know their names, that’s OK.  Look it up before you let the news crew in your house.  If they can’t answer, call 911 immediately.

1.  Examine their credentials.  We all carry around stuff that looks like this.  Almost none of it adheres to any kind of standard, like a drivers license.  Truth is, anybody with a computer and a printer and some plastic and string can make stuff that looks like this.  But odds are, a burglar won’t think to do it.  So ask.  Make sure the photos match.  Then as a backup, ask for a driver’s license.

It turned out that the news crew that visited the Lilburn woman’s house was an authentic freelance crew hired by ABC News.  The looter who showed up later was unrelated, police said.