Vodpod videos no longer available.
Most politicians, and their staffs, have sense enough to avoid the hamhanded treatment Gov. Nathan Deal gave WAGA Friday.  It inevitably hurts the politician, not the news organization.  It happened to Deal Friday. 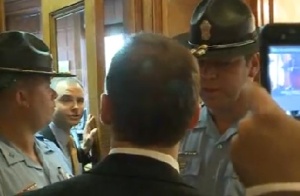 Russell’s story was low-impact compared to pieces done about Deal during the campaign outlining numerous issues that raised questions about the candidate.   Russell’s piece was a clean hit.  It raised reasonable questions.  Notably, Deal’s office declined comment — although the campaign’s chairman talked to Russell on camera.

The significance or fairness of Russell’s story is irrelevant here.  (In a conversation with me Friday, the only inaccuracy Robinson cited was Russell misidentifying Deal’s campaign chairman as “campaign manager.”)  Robinson felt the piece was a smear.  For the sake of argument, let’s say he’s right.  Robinson is fiery and fiercely protective of his boss.  Robinson was instrumental in helping Deal rise from the third tier of Republican gubernatorial hopefuls to capture the nomination, then beating former Governor Roy Barnes in November.  Normally, he knows what he’s doing.

He botched this one in a big way.

Russell’s story was a mere blip on Friday’s political landscape until the moment Robinson decided to seek retribution on WAGA by banishing Justin Gray and photog Eric Len from Deal’s presser.  It was the lead on WAGA’s noon newscast.  Within minutes, it was on social media.  At 2:54pm, it was on Peach Pundit.   At 3:54, it was on Rodney Ho’s AJC blog.  At 6:21, it was posted to WSB and WGCL’s sites,via a CNN writeup (partly written by ex-WAGA guy Gustavo Valdes, who’s seen in the video holding an iPhone saying “CNN coming through!”).

"Clearly, it was not a good day for the Governor's office." Brenda Wood on WXIA, talking about WAGA and Deal.

In its 7pm newscast, WXIA’s Brenda Wood delivered a commentary condemning the Governor’s reaction.  “Talk about overstepping your boundaries,” she said.

“What else am I supposed to do?” Robinson asked me during our phone conversation late Friday afternoon, though he wasn’t really interested in the answer.  Robinson wanted to turn the conversation toward the finer points of his dispute with Russell’s story.

If you want to hear Robinson’s side of it, click here.  He debated Russell on a WGKA radio show Friday night.  (Click on “Brian vs Dale Round 2.”)

But the rest of the media coverage never touched on that, and he knew that it wouldn’t.  Instead, the other media gave a thumbnail sketch of Russell’s reporting, and focused on the the Governor’s office’s unusual reaction to a story most other media wouldn’t have otherwise followed.

By the way, Deal was within his rights to be selective about whom to invite to his presser.  It’s not a “public” event, like a legislative committee hearing.  Politicians play favorites with the news media, but it’s usually subtle.   Banishing a longstanding news organization from a news conference isn’t illegal.  It’s just dumb.

Here’s the answer to Robinson’s “what can I do” question:  You gripe to the news organization that you feel wronged you.   If the report was a malicious smear, hire a lawyer and sue the news organization.  Otherwise, you keep it in perspective.  You don’t get emotional.  You take your lumps, as you’ve done in the past.

If the report merely painted your guy a little unfavorably, you take extra care to not make it worse.  Deal’s office should have done that Friday.
Vodpod videos no longer available.