It happened October 4, a Tuesday evening.  Three political operative-types were seated with me at Manuel’s at a table in the non-smoking section.  The former DeKalb CEO enters the room.  Vernon Jones sees us and makes a beeline across the room toward our table. 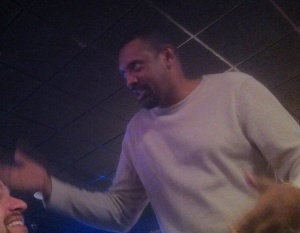 I have, shall we say, a peculiar history with Mr. Jones.  I covered many of the controversies that followed him while he held office.  During that time however, we had an ongoing rapport that only occasionally descended into head-shakingly unhinged qualities for which Jones became known.

Since leaving office, I’ve seen him three times.  Each time, he’s treated me as if I’m his mortal enemy.  I wrote about the first one, which was genuinely bizarre.

In 2010, I saw him with a freelance TV photographer at a Nathan Deal campaign event at DeKalb-Peachtree Airport.  So that I couldn’t hear him, Jones whispered to other reporters that he was shooting something for a cable TV show.  I resisted the temptation to engage him about his apparent conversion to the fourth estate and gave him a wide berth.

This was the third.  As Jones approached our table, I stood and smiled and greeted him.  He shook my hand and those of the other folks at the table, who also knew him.

What are you doing now?  somebody asked.

I think I’m going to start a web site to fact-check reporters like Doug, he answers.

That’s actually kind of exciting, I start to say.  Then his body language changes.  He assumes a chilly stance toward me while continuing to chat with the other folks at the table, one of whom has grabbed him by the arm so that he wouldn’t leave.

Hey Vernon.  I hear I should call you “Angus” now, I say to him.

Friends of mine who live in Atlanta’s Old Fourth Ward have told me about two different dwellings Jones has moved into over the last three years.  In both locations, Vernon has identified himself as “Angus Jones,” an apparent nom de street.  I’ve been told Angus is his middle name.

It was intended as an icebreaker.  It didn’t work.

Jones turned his back to me while continuing to talk with one of my table-mates.  Periodically, he’d spin toward me and mutter something about “reporters like Doug who can’t ever get their stories right,” then spin back away.

Why yes, sir. This is a camera in my hand.

He was at the table ten minutes, tops.  He never sat.  He spoke about me but never to me.

I was disappointed.  I still think that Vernon has mistaken me for somebody else — another reporter, perhaps — who really did give him hell when he was in office.  Dale Cardwell, maybe.  Except I’m pretty sure Vernon can distinguish me from Cardwell.

It would have been a bonus to actually have a civilized chat with the guy over a beer.  There’s a lot to discuss.

Instead, Vernon walked off.  “Always good to see you Vernon.” I oozed sincerity.

As he got halfway across the room, Jones turned back toward the table and finally addressed me.

In a loud voice, he pointed toward me and said Hey Doug!  I know who she is!  I know her name!

What was he implying with that? I hear you asking.  The folks seated at the table certainly asked.

Beats the hell out of me.  And I’m disinclined to overanalyze it.  It is what it is — another strange encounter with one of the strangest dudes I’ve ever covered.

29 thoughts on “Vernon Jones walks into a bar….”