People often assume reporters have actual expertise in the stories they cover.  Some actually do.  Jim Galloway is a genuine expert on state government and politics.  But I’ve learned to tread lightly when called to represent myself as an expert on pretty much anything.

When Occupy Atlanta became a “thing,” I paid enough visits to the encampment to have developed more insight to the story than, say, those who watched the story unfold on TV.  It turned out my insight was very limited, though. 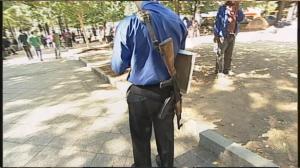 When Mayor Kasim Reed announced that he was rescinding the Executive Order that allowed Occupy Atlanta to stay overnight in Woodruff Park, he said he would lift the order “at a time of my choosing.”  He said he would try to negotiate the group’s withdrawal from Woodruff Park via a group of clergy.

This led me to casually predict that Reed was “in no hurry” to call in the cops to forcibly evict Occupy.  My prediction was based on my belief that Reed didn’t want to show a heavy hand against folks with whom he largely shared a leftist political outlook.  Specifically, I’d heard Reed complain weeks earlier about corporate America’s failure to create jobs while turning record profits — more or less the exact complaint of Occupy Atlanta.

The day after Reed’s announcement, I produced a story about Reed’s upcoming decision.  While I was in the park, another 11Alive crew told me they’d seen a guy walking around the park with an assault rifle.  The weapon was a semi-automatic knockoff of an AK-47.

My thought was:  This is Georgia, where politicians brag about their arsenals.  Ain’t nothing special about toting a big ol’ gun in public.

Shows what I know.

Reed specifically cited the presence of the weapon as his rationale for barricading Woodruff Park that day, then sending in the cops early the following morning.

Fortunately, nobody remembered me speculating about the timing of the dispersal of Occupy.  Or if they did, they were too polite to bring it up.

If I cover a murder trial, somebody will invariably ask me what the verdict will be.  I’ve been wrong so frequently that I won’t do it anymore.

I don’t mind somebody touting me as an “expert,” if you’re merely comparing me to somebody who has no first-hand knowledge of a news event.  But the truth is:  I’m only expert at putting facts together, and weaving them into a storyline on deadline.

That only makes me a TV reporter.