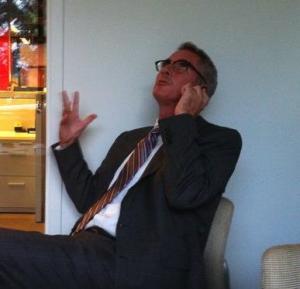 When we speak, most of us gesture.  We can’t help it.  It’s natural.  Especially when we’re being emphatic, the hands and arms tend to move in conjunction with the words.  The best of us do so with the style of a symphony conductor, with words and movements that fully communicate.

Even on the phone, gesturing comes naturally (left).  Ben took this photo in our newsroom while observing me in the throes of a heated phone chat with a brain-dead public information officer person.

Gesturing on TV is different.  If the material is unscripted, then gestures naturally accompany the words.  When reading a script or a teleprompter, then gesturing can be affected and unnatural.

About twenty years ago, I began to take note of some very earnest gesturing by ‘prompter-reading news anchors.  (Perhaps they’d done it before, but that’s when I noticed.)  Even when their image appeared on TV only from the neck up, the gestures would fly off camera:  Arms waving, hands chopping, fingers pointing.

Though the arms typically didn’t appear on camera, they let fly anyway.  One suspects that talent coaches advised them to gesture because it added energy to their from-the-neck-up presence.

I have yet to master the art of scripting body language.

The piece below classically exposes this shortcoming.  I dashed out this piece within a few minutes on a Thursday afternoon, loaded it into a ‘prompter page, then went into the studio moments later to perform it.  Though I was familiar with the material, I’d failed to read it out loud prior to reading it on camera.

After the recording began, I read the first line and realized I hadn’t gestured.  As I started reading the second line, I threw out a gratuitous arm-wave at the start, emphasizing “the picks” instead of “the news professionals,” as I should have done.

Then came a list of stories, each with a hand gesture.  With some prior thought, I might have flailed less and done the classic two-handed finger-count, with the forefinger of the left hand touching successive extended fingers on the right.

About 35 seconds into the piece, my gestures began to get into sync with my copy.  “Act naturally,” as Buck Owens sang in the early 1960s.  It’s not as easy as it looks.

2 thoughts on “The empty gesture”