Whenever I want a reality check about the future of my industry, local TV news, I’ll ask young people how they get their information.  Even the youngsters touring our newsroom or applying for internships will admit they rarely watch, and typically turn to the internet for their dose of current events.

But we ain’t dead yet.  And the writer of this piece — a twentysomething who became the number two manager in the newsroom at WXIA– thinks reports of our demise may be exaggerated.  I hope he’s right.

A friend of mine often asks me, “What’s new with the water skiing squirrel? Did he rob a bank?” This is as cynical as it is naive, of course. Squirrels don’t have opposable thumbs. This is the ninth biggest news market in the country, not Medina, Ohio. Even if they did, they would probably have to hold a SWAT team at bay for a few hours before surrendering peacefully at 5:05 to make an evening rundown. Or maybe not. 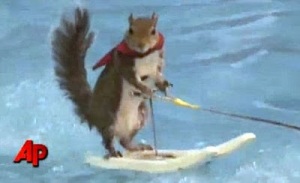 But when I ask him how he found out about the Hemy Neuman case or the new Falcons stadium, he shrugs, “I just heard about it.” This is bad news for news barons. It is even worse for advertisers.

Doug Richards asked me to think aloud about the state of Atlanta news. It’s not like I haven’t before. I lay in bed at night wondering when I’m 65 and have a prostate the size of a squash ball will there still be a job for me? But it’s hard to think about your passion, your profession without sounding equal parts jaded, sanctimonious, and these days, fatalistic.

1. We really need local news. Outlets are only as powerful as politicians and bureaucrats who consume them. We are only as relevant as the communities that watch us, read us, share us, tweet us. Traditional media outlets (which I extend to their new media arms) hold all the cards right now in Atlanta, with two notable exceptions. This will not always be the case.

2. The intertubes didn’t kill TV news. If you don’t believe me, ask 60 minutes, CBS Sunday Morning, Nightline, and MSNBC. They are all growing. They are all doing it without gas card giveaways and TV parlor tricks. As we say in the business, content is king.

4. Local news has to start giving people something worth watching. Every time someone changes the channel an anchorman gets his wings, hanging up a shabby blue blazer muttering, “this business has changed too much.” TMZ has justified their seat at the MSM dinner table with big breaks on Tiger Woods and Michael Jackson. What has your local news station done for you lately? 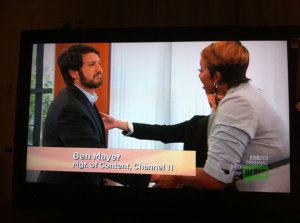 5. Social media isn’t a pyrrhic victory. Every time WAGA breaks an Eddie Long story, it raises the #failwhale from Twitter’s briny depths. That’s power, eyeballs, and viewership. And Social media hasn’t replaced news. It took Twitter to break the Trayvon Martin case. It took MSM to get people to do something about it.

Mayer concluded this with “amazing ending here!” but got distracted by his move to New York and never wrote the conclusion.  I kinda don’t think it needs one.

Mayer left WXIA in April to become a segment producer on Morning Joe at MSNBC.  He departed quite the beloved figure in our newsroom, a guy who is easily bright enough to succeed in any number of moneymaking industries that aren’t on the proverbial precipice, but opted to work in news anyway.  I’m proud to have been part of his illustrious career, and I’m gonna miss his… insight.