Monday at 12:15am, I will appear as a voice and an animated caricature in Squidbillies, a show on Cartoon Network’s Adult Swim.  By any reasonable standard, this is pretty high on the awesome scale; it probably even exceeds the cameo I’ve long craved on The Daily Show with Jon Stewart or The Colbert Report.

But this is where I officially debunk any notion that this actually makes me awesome, and disclose — for those who haven’t already figured it out — how this actually happened.

Here goes:  Mrs. LAF works down the hall from the creators of Squidbillies at Adult Swim’s Williams Street headquarters.

Sometime in 2008 or so — during the heyday of this blog — the missus had a conversation with Jim Fortier, co-creator of Squidbillies.  When they started talking about their families and the missus identified her spouse, Fortier revealed that he was an occasional reader of this blog.

She’s had that conversation with other coworkers at Cartoon Network.  Not many, of course.  To the extent they know me at all, they know me better as a blogger than as a local TV news goon dating back to the Reagan administration.

Fast forward to another occasion where either Fortier or co-creator Dave Willis — she’s not sure now — heard me on TV in Mrs. LAF’s office.  Hey, we could maybe use a voice like that sometime, she vaguely remembers somebody uttering.  She’s also not completely sure the voice didn’t actually belong to Fred Kalil.

Fast forward again to sometime in 2011, when I finally met Fortier for the first time.  He was the nicest guy in the world, pretty much.   I like the blog.  You still write it?  I get that a lot.

If you ever need a voice, hit me up.  Fortier politely nodded at my naked solicitation.

Fast forward to April 2012, when Mrs. LAF informed me that the Squidbillies creators wanted me to voice a local TV news guy.  I’m a fan of the show.  So for about half a day, I levitated.  After seeing the script, my bossfolk at WXIA blessed the appearance.

But you have to do a story on it!  The BL was insistent.

The script was about a crime spree committed by the show’s main character.  Hilarity ensues when media attention fixes on the character’s teenage son, who takes the fall for his daddy’s crime spree. 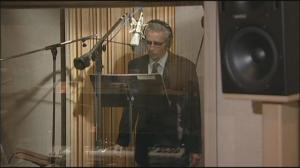 Days later, I recorded the voiceover at a studio within walking distance of my workplace, which Steve Flood documented on video.  Later, John Kirtley shot my interview with Fortier and Willis.  Willis is also a creator of Aqua Teen Hunger Force (or whatever they’re calling that show these days), and is the voice of Meatwad and Carl on that show.  “Anderson Cooper and Wolf Blitzer both shot us down….” Willis deadpanned.

The story on 11Alive.com. describes the voiceover session, which I handled like an amateur.  Kirtley edited the video piece.  Watching the raw tape, I was a little embarrassed by my inability to handle basic instructions.  Afterward, the animators had to look me up on Google to see what I look like.  Their rendering of me was way more flattering than I deserved.

Lacking the in-house connection, the creators of Squidbillies could have made a more obvious choice by asking Atlanta’s leading cartoonish local news guy to voice their character.

Instead, they got me.  And they got me again.  They wrote me into another script in next season’s Squidbillies.  I’ve already voiced it.  It’s a story about Creationism v. Darwinism, near as I can tell.

So yeah.  It’s not how awesome you are. It’s who the wife knows.

Editor’s note:  Best I can figure, WordPress will no longer allow me to embed video from 11alive.com or any other news site.  I may move the blog to another platform, though the domain name would be the same.  I welcome your suggestions, including any info that can tell me what I’m doing wrong.  Thanks for visiting.

3 thoughts on “Live from Dougal County”