Jackwagon’s energetic new self-titled CD showcases a band that’s getting it right.  The three-piece has produced a refreshing record rooted in traditional blues-based rock–  strung together with a  crisp, buzzing guitar and catchy songwriting.  It’s a kicky sonic assault that’ll lodge into the fun part of your brain and linger… long past the moment you stop asking yourself whatever the hell a “jackwagon” is. 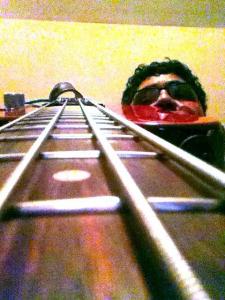 I have no record reviewing skills, which may explain why CNN Español guy (and former WAGA photog) Eddie Cortes asked me to review his latest aural output.  It’s a self-titled record from the band he decided to call “Jackwagon.” He knows I’m a sucker for all things Eddie; our invasion-of-Iraq experience in 2003 cemented that.

While driving to Augusta Friday  — where we spent some quality time with GOP congressional candidate Lee Anderson — Dan Reilly and I listened to Jackwagon.  The good news:  When the CD finished, and returned to song one, neither of us reached for the “eject” button.

It was a fine record for 300 mile round-trip drive.  Each song is uptempo.  The guitarist, Robert Blondeau, is inventive yet firmly rooted in a Slash / Van Halenesque comfort zone.  His riffs make the record, though the maniacal work of drummer Patrick O’Connor seasons it nicely.

Among his friends, the longstanding joke about Eddie’s various rock bands is that Eddie ends up singing.  He’s a fearless vocalist, despite a range that can generously be described as “limited.”  The new record has some surprises; in a song called “Battle Heart,” Eddie’s vocals are expressive and help keep the song interesting.

The record is much better than I’d hoped.  The songwriting actually is solid, for the most part.  The record is well produced; Eddie says the band paid for studio space and had it engineered by a guy who actually knows what he’s doing, and it shows. 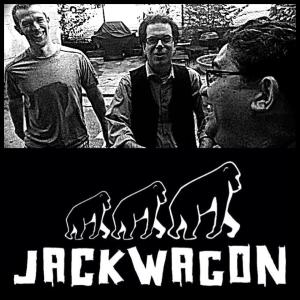 “He ought to be singing about live shots,” Dan started to say after I revealed that Eddie was behind the record.  At that point, the song “Carolyn Day” came on.  Eddie wrote that song a decade ago, in a moment of obsession over an appealing WAGA reporter named Carolyn Day.  Carolyn left the news biz shortly thereafter to work at a B&B in southern California. She now works with a production company there. Jackwagon has remade the song longer and louder; the song wasn’t particularly good to begin with except as an inside novelty, and this doesn’t improve it. I’m pretty sure the lovely Mrs. Cortes still rolls her eyes whenever she watches Eddie’s band perform it.

The real head-scratcher, though, is the band’s name.  “Jackwagon” brings to mind a gnarly fur bus filled with paunchy former frat guys who’ve removed their wedding rings for an evening of stoopidity.  Recently, an 11Alive photographer suggested, incorrectly, that the Butthole Surfers is the worst band name ever.  I countered with Jackwagon.  Although I’ve offered to consult with Eddie about band names, he has declined my generosity on this issue.

Should you buy the record?  The download is $9.99.  Have you ever pissed away ten bucks on two beers at a bar?  Or given a Hamilton to a guy who “just needs money for gas to get home”?  Of course you should buy the record.  Or at least like their Facebook page.

Even if you aren’t embarking on a 300 mile round trip to meet a guy running for Congress.

Jackwagon is having a CD release party thing at Famous Pub at Toco Hill on October 13.  I’ll probably miss it.  Go hug Eddie for me!

1 thought on “Circle the Jackwagon”