“Sometimes you get the bear.  And sometimes, the bear gets you.” – Cdr. Will Riker

While Ross Cavitt and company watched the Adairsville tornado blow past their rolling TV camera, certain other crews of newsgatherers spent Wednesday January 30 at the other extreme of the newsgathering clusterfΦ♣k that takes place in severe weather situations. Fortunately, this timeline is not indicative of a typical workday at my shop, which constantly strives to use resources efficiently.  But severe weather is never typical.

9:40 am.  I’m told that I’ll be stationed in DeKalb County, awaiting severe weather.

10:15  I’m told they’re calling in Pete Smith, a nightside photographer, to work with me.

11am.  Smith shows up at work, informs me we’re going to Carrollton.  Carrollton is the westernmost spot in Georgia that’s accessible by microwave signal.  Since weather tends to come from the west, a news crew always gets sent to Carrollton.  Julie Wolfe and company are already in Carrollton for the AM news.  Smith and I are to relieve them.

11:50.  We arrive at the Carrollton exit, spot a WAGA crew at a gas station doing the same thing we are.  By this time, reports have begun to come in that a tornado has struck in Adairsville, some 50 miles to the north of us.  WXIA and other Atlanta stations have pre-empted all programming for weather coverage.

12:48.  The assignment desk tells us to head to Dallas, where there’s a tornado warning.

1:30.  We arrive in Dallas.  I call the Paulding Co. Sheriff’s Office.  A woman tells me, in great detail, that the only incident on their radar involves a fallen tree branch.  By the time we arrive at the tree branch, cleanup crews are packing and leaving.  Smith finds an awning and shoots a semi-flooded street near downtown.  I take a photo and post it on Facebook.  The caption says “On the fringes of today’s severe weather, there’s us.” 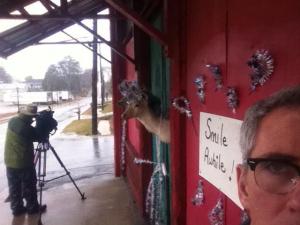 Doug and Pete in Dallas, GA

2:07.  An email informs the dayside staff to expect to work through the 11pm newscast.  In addition to field crews, the note applies to producers and managers.

2:14.  The desk tells us to go to Holly Springs, where flooding has damaged a street.

3:30.  We arrive at our Holly Springs destination.  Flash flooding has receded.  There’s no evidence of damage.  Smith tromps into the rain to shoot video of standing water in a city park.

4:15.  I send a text message advising that we’re wearing “the golden sombrero,” a term used to describe a baseball player who has struck out four times in one game.  Other reporters text back saying they’re experiencing a similar absence of newsgathering opportunities.

4:18 Two reporters who are actually covering storm damage reply to our texts, admonishing us to quit sending mass text messages.

5:30.  We arrive in Calhoun, park our live truck in a driveway leading to a destroyed house.   Smith fires up LiveU.  McLaughlin prepares for a live shot.

6:05.  The live shot fails.  Turns out cell phone service is spotty.  McLaughlin does a phoner.

6:15.  Hoder and I visit a destroyed house, where I see people perusing the wreckage with flashlights.  We interview a man who says his pee-paw was inside the house when the tornado struck.  Pee-paw is nearby, loudly indicating that he wants us to scram.  We exit the property with about five minutes of video.

7:15.  I see an email indicating that dinner is being served in the newsroom.

7:25.  I buy a Slim-Jim at a convenience store.  Along with an emergency granola bar I keep in my bag, it turns out to be supper.

7:30.  We relocate to the hospital in Calhoun.  No victims are there — they either got released, or got sent to a trauma center in Chattanooga.  But the cell service is more reliable.

8pm.  Hoder and I fire up laptops to edit stories.  Hoder and McLaughlin’s piece is 48 seconds long.  My piece, featuring Pee-paw’s grandson, is 38 seconds.

10:11pm.  McLaughlin successfully does a live shot in the 10pm newscast, tossing to his package and tagging it from the hospital.

1am.  I see the inside of my bedroom.

And a decent paycheck for a day’s work, for which I’m very grateful.

5 thoughts on “Inside the golden sombrero”