You’re a reporter at a local TV station.  An idea emerges at an editorial meeting, and the eyes around the table turn to you.  “We have you in mind for this,” you hear them say. 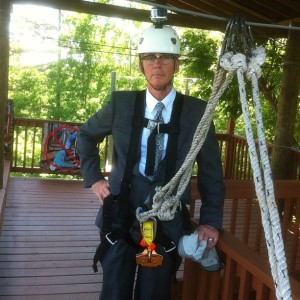 You like fun.  You much prefer it to the mayhem that fills out much of local news.  You’re a team player.  You smile and salute.  And as you return to your desk, you ask yourself:  What the fizzle am I gonna do with this?

One such stroke of genius sends you to Manuel’s Tavern, a renowned Atlanta watering hole.  You’re sent to stalk a film crew shooting Anchorman 2.  Your boss is somewhat obsessed with Georgia’s emerging filmmaking industry, no doubt reflecting a similar fascination held by the audience, whose American dollars sustain your advertising / ratings-supported news operation.

You arrive at Manuel’s to see production equipment in a parking lot, but no crowds of spectators, no actors standing around waiting to be interviewed by the local news, no invitations to get close to the action.  Your assignment looks to be a bust.

You’re having a “make it work” moment.

In this instance, the TV station has given you two valuable resources:  An agreeable photographer in the person of Steven Boissy, and an even more agreeable co-talent in the person of 11 Alive’s Elle Duncan, who loves this assignment much more than you do.

You alter your approach.  You decide to produce the piece documentary style, a first-person “here’s us trying to cobble together a story with almost no elements” approach.   You try to do stream-of-consciousness narration on scene, woven amongst bits of on-camera schtick.  Thanks largely to Duncan, the story is watchable, somewhat amusing, and accurately reflects what happened outside Manuel’s that day.

You become a victim of your own success.  Another opportunity emerges from another editorial meeting.  This time, the boss is intrigued by a Youtube video shot in Whitesburg, Ga.  It shows a man leaping from a 100 foot bungee platform with a basketball, and sinking a shot in a standard 10-foot-high hoop.

The agreeable Al Ashe pilots a vehicle to Whitesburg.  Because you are cowardly, you conclude there’s no way in hell you’re jumping from a hundred foot platform to try to replicate the shot.  But there are zip lines available.

You’ve decided to do the piece documentary style, again.  Trace bits of on-scene narrative, flavored with schtick, will tell the story of a Youtube video shot days earlier in the same location.

You interview a guy who eyewitnessed the Youtube shot.   He has placed a basketball goal near the end of a zip line.

You’ve made a comedic decision to keep your suit on as he straps you on, then hands you a basketball.

You squirt out of a tower on a zip line, holding a basketball, wearing a Go-pro.  You spend the first half of the ride trying to manage holding the zip line and the basketball at the same time.  As the hoop comes into sight, you figure it out.

You hoist the ball with one hand, hurl it toward the hoop, and watch it clank off the rim.

Yet the story is watchable, somewhat amusing, and accurately reflects the story, which wouldn’t have been much of a story without your heroic effort.

“The story isn’t about you,” you hear your readers saying.  And they’re right.

Except for when it is.

For one brief, exciting moment last week, I was a walk-on member of the Atlanta Association of Black Journalists.

It was exhilarating.  It was awkward.

A face in the crowd

I needed to talk to Atlanta Mayor Kasim Reed about the Peachtree Road Race.  My station, WXIA, had gotten results Monday morning from a scientific poll which asked, among other things, about the public’s desire to see increased security at the Peachtree.

Reed has a 10:30 meeting with the Atlanta Association of Black Journalists, somebody said.  Off I went with Mike Zakel.

Neither of us was a member of the AABJ.  Though both of us may be categorized as “journalist,” and we both gather news in Atlanta, we appeared to lack the third key qualification of membership.

We arrived in the lobby of the mayor’s office.  The receptionist pointed to a door off the lobby.  “They’re in there,” she said.

“Is Kasim in there?” I asked.  She answered affirmatively.  It was 10:33 am.  Reed is famously punctual, unlike me.

I opened the door.  The first person I identified was Mo Diggs, the WAGA reporter who has spent decades rattling cages around city hall.  Scanning the conference room table, I recognized at least two AJC reporters.  The mayor was at the head of the table, speaking informally.  There were no notebooks on the table.  It was clearly an off-the-record chat.

There were about a dozen people in the room.  All of them appeared to have the key AABJ qualification that I lacked.

I closed the door behind me and sat at a chair along a wall behind the table.  If Mo Diggs was in the room, then by gosh, I was gonna be there too.

My eyes met with those of Sonji Jacobs Dade, Reed’s communications director.  She was seated next to the mayor.  Sonji has a lovely smile, and she directed it toward me.  But the smile and the gaze lingered.  I could detect wheels turning in her head.

I sat and listened.  Act like you belong there is a rule that often guides me in the news biz.

It took about three minutes for Sonji to rise from her seat.  She and Eric Sturgis, the workhorse AJC reporter and president of the AABJ, walked toward me.  They led me out of the conference room.

This is a members-only event for the AABJ, Sonji started.  The mayor’s office put this together at their request.  It’s a private meeting.  This isn’t a press conference.  Though she wasn’t kicking me out, she appeared to be laying the factual groundwork to convince me that I belonged outside.

“So you’ve checked the membership credentials of everybody in the room?” I asked.

I’m pretty sure everybody in there is a member, she answered.

“How do you know I’m not a member?” I asked.  There was an awkward pause.

Sonji regrouped.  Here’s the deal.  There are ground rules.  The first part of the meeting is off-the-record.  Midway into the meeting, we’ll open it up for on-the-record questions.  I just want to make sure you’re aware of the ground rules and that you’ll abide by them.

“Works for me,” I said.  We returned to the room.  I took my seat against the wall.  I also took the opportunity to imagine myself in the shoes of Sonji and Sturgis.  Reed has private meetings all day long.  This was, admittedly, a gray area.  On one hand, they were generous for allowing me to crash their private meeting.  On the other hand, I’d kind of backed them into an uncomfortable corner.

That afternoon, I sent Sonji an email acknowledging the awkwardness of the encounter, and thanking her for handling it as well as one could have hoped.

Later in the week, I saw Mo Diggs at another story.  When I worked at WAGA, Diggs’ cubicle was two seats from mine.  “I need you to sponsor my membership in the AABJ,” I told him.

The voice on the other end of the phone was very irritated with one of my competitors.  The reporter was producing a story about a government worker who had some issues in his personnel file — some citizen complaints, some reprimands.  The caller was a friend of mine and a friend of the worker.

The reporter is trying to trick him into an on-camera interview– claiming the interview would be about his reinstatement.  It’s a set-up to ambush him about all the other stuff in his file.

It’s bullshit!  The reporter is lying in order to get an interview. 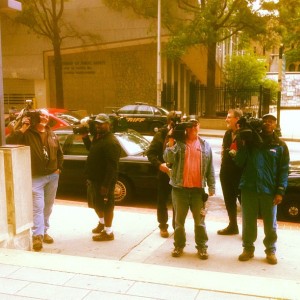 I was sympathetic to the argument.  I’m not a fan of smarmy reporter behavior.

But I was torn.  I can understand why folks would expect reporters to be completely up-front about their intentions when approaching subjects for interviews.  Reporters demand the truth from newsmakers.  If we aren’t completely truthful ourselves, then we’re hypocrites.  If we’re willing to shade our own honesty, then we deserve our rankings of distrust among car salesmen and members of Congress.

On the other hand, it’s a really lousy way to get interviews with people who’d prefer to sidestep the truth.

There’s no doubt that subjecting scoundrels to our  questioning is part of our job.  If we don’t do it, then we fail to hold the powerful accountable.  Not to mention, the public expects to see deserving people squirm under uncomfortable questioning. It’s part of the theater of TV news, as perfected by 60 Minutes.

But how do you get them in front of a camera to ask those questions?

You have to be honest.  Put all your cards on the table, I hear you saying.  In a perfect world, sure.   But it’s not realistic.

Pitching interviews with “targets” of stories is an age-old challenge.  You have to phrase your pitch honestly, but you don’t have to include every detail.  Earlier this year at the state capitol, I approached lawmakers about their thoughts on public financing of a new football stadium.  I knew that some of them had taken free Falcons tickets from the Georgia World Congress Center, and asked them about that too.  The latter topic was a legitimate line of inquiry honestly related to the initial pitch.

After they agreed to the interview, I told them I also intended to ask them about the tickets.  It was a way to fully state my intentions without scaring them off, giving them a  moment or two to frame an answer to a potentially uncomfortable question.

Public servants are fair game for such stuff.  For that matter, so is any newsmaker who has some ‘splaining to do.

I had no good answer for my caller.  It sounded like my competitor was playing by the rules — broadly stating the topic of the desired interview, while keeping key details under wraps until the right moment.

It may not help our poll numbers.  But it helps us do our jobs.