A series of bad decisions led a 20 year old named Elijah Freeman to this:  Handcuffed, seated in the back of a Clayton County police car, wearing a t-shirt and boxer shorts.  Police had told us that the alleged carjacker was about to get walked into police headquarters.

I had arrived at Clayton County police headquarters to talk to the PIO about another story.  Moments before we arrived, Mr. Freeman  had crashed the car he’d allegedly carjacked into the front lawn of police headquarters.  Tom Jones of WSB was also there for the same reason. 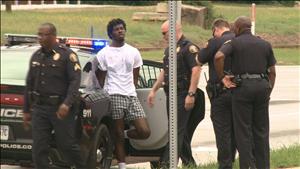 I saw Freeman in the patrol car.  Occasionally, the cops let him out of the car as they talked, and as crime scene techs snapped photos.  I was struck by Freeman’s absence of pants, and quickly deduced the reason:  Freeman was a devotee of a style of fashion derisively known as pants on the ground.

At one point, a crime scene photographer bent over a pair of pants crumpled on the ground nearby, documenting the evidence.

“The suspect ran out of his pants,” a police major confirmed in an interview, efforting a straight face.  As in:  The pants fell off as the bad guy tried to run, slowing him in his losing foot race with pursuing cops.

An arguably poor fashion decision was a crimestopper on this day.  That, and the force of gravity.

I am pretty broadminded about fashion and music and culture, but I completely do not get pants on the ground.  I find it odd that young men, most of them African American, appear to believe that it’s attractive to have the waist band of their pants lingering midway or below the gluteus maximus, such that they must struggle to walk by using a free hand to prevent the pants from falling to their ankles.

Yet if you’re running from the cops, this fashion choice can complicate things considerably.

The patrol car drove up to an entrance.  Freeman was in the back.  Jones and I waited.  (Watch the perp walk here.)

Did you carjack that woman?  Jones got the first question.  I respect the fact that Jones “owns” Clayton County, news-wise.  He does great work there.

My turn:  Any regrets about today, Elijah?  My question was more open-ended, but Freeman wasn’t talking.

What happened to your pants, Elijah?!  Jones went straight to the top-of-mind question, knowing a response wasn’t likely.

The perp walk lasted all of twenty seconds.  As Freeman approached the door, I moved in front of him for one last, futile question:  Do you wish you had worn better-fitting pants today?

Silence.  Then Freeman disappeared into the cop shop.

Considering that this man was accused of carjacking a woman at gunpoint, the questions about his pants may have seemed superfluous.  On the other hand, he’d clearly showed a disinclination to answer questions about the crime.

It’s too bad he didn’t answer the pants-on-the-ground questions.  It might have helped clear up something that continues to mystify this old guy.

1 thought on “Crime of fashion”