The woman wore a script tattoo above her clavicle that said “Big Dog’s Bitch.”  She was angry.  She was chatty.  She was drinking a beer.  It was barely noon. 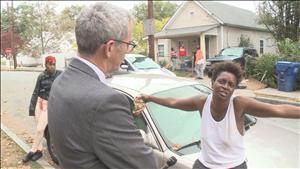 The tattoo was visible because she was wearing a dirty white tank top.  The getup needed an undergarment but she wasn’t wearing one.

When I asked her her name, she said “Meatball.”  Meatball saved my story Thursday.

She was one of more than a dozen people I’d spotted on Coleman St. SW Thursday, a day after a gun battle raged between competing gangs.  The neighborhood, in Atlanta’s Pittsburgh community, was rough — as evidenced by the number of boarded-up houses, the apparent unemployment of working-age people who were hanging out during the day.  And, of course, the gang fight.

My boss felt that my TV station should send somebody into the neighborhood after the gang fight sent an 11 year old boy to a hospital with a gunshot wound.  I noted that communities often clam up after such incidents.  In a place controlled by gangs, nobody wants to appear to be a snitch.  Plus, police hadn’t announced any arrests.  The people with the guns were still out there.

The boss was insistent.  I semi-volunteered to go.

We left the camera in the car as we approached the folks on Coleman St.  I identified myself.  Some of them kind of recognized me.  (“Buck Lanford!  Wait, no.  Randy Travis?”)

They were wary but not hostile.  The woman who called herself Meatball emerged as the one most willing to talk about the neighborhood and the conditions that led to the gun battle.   She was animated.  She was semi-articulate.

People often ask us:  Why do you put the dumbest people on the news?  I’m not saying Meatball was dumb.  She was profane.  She used street vernacular.  She was easy to understand in person, once you got the flow of her language.  In sound bite form, she was a less-than-ideal spokeswoman for Coleman St. SW — and probably raised that frequently-asked question among our viewers.

She was all I had, though.  Her tone and her body language spoke volumes about the conditions on Coleman St.  Not to mention, her willingness to helpfully point out a drug transaction that was taking place within camera range.

She saved our story when she began engaging some of the other people on the street in a spirited discussion of the previous evening’s events.  By this time, they’d gotten accustomed to us and the camera we’d produced with Meatball’s consent.  The anger and finger-pointing gave our story what appeared to be a real sense of what life was like on a street wracked with crime and violence. 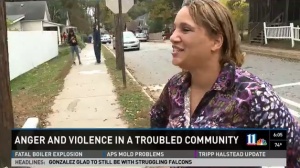 (If you view the story, you’ll also we that we got even luckier when Pastor Anita Favors also agreed to chat with us.  Favors gave the story clarity, while Meatball and Co. delivered a lot of raw emotion.)

So we got lucky.  And the boss, it turned out, wasn’t completely wrong.