The Chamblee police department is not very happy with me right now.  Their officers made the decision to produce an arrest warrant for Kaveh Kamooneh, the guy who helped himself to an electric outlet at a public school to juice up his electric car.  Tuesday, the Chamblee PD did the right thing and agreed to an interview about the case.  A day later, the chief had apparently shut down subsequent interviews — and spent some quality time on the phone with my boss, griping about my coverage of the story.

Kaveh Kamooneh and his electric car

The story itself dropped in my lap courtesy of the lovely Lea-Anne Jackson, the WXIA promotions chica whom I first knew in the early ’90s as a WAGA intern.  Kamooneh is her friend and neighbor.  It was one of those stories which, when pitched in the editorial meeting, drew a collective gasp from coworkers — one of my favorite noises in the world.  (My least favorite noise is the rippling murmer of “oh yeah, I heard about that too” or “we did that last night” following what you thought was a unique story pitch.)

As I stood in Kamooneh’s driveway interviewing him in front of his Nissan Leaf, I got a call-back from Sgt. Ernesto Ford of Chamblee PD.  Ford is a classic professional cop.  He made himself readily available and gave no-bullshit answers to the reasonable questions he’d undoubtedly expected on this case.  His bottom line:  The guy was a thief, and the department did the right thing getting him thrown in jail.

Ford made some points that did not get into my story, causing the blowback from his boss to my boss. 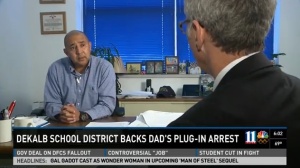 1.  Ford said Kamooneh was “uncooperative” during his initial encounter with the officer who observed Kamooneh’s Nissan Leaf plugged into the school outlet.

Kamooneh had volunteered to me that he had questioned the cop that he spotted inside his unlocked and empty car, rifling through his glove compartment.  When the cop suggested a theft charge was pending, Kamooneh told me that he strongly questioned the appropriateness of such a charge.  Kamooneh says he also demanded the cop’s name and badge number, and claimed the cop refused to cleanly explain why he entered Kamooneh’s vehicle (Kamooneh says he was fifty feet away at the tennis court when the cop drove up).

So in other words, Kamooneh sassed the cop.  Ford initially raised this as an aggravating circumstance that contributed to the decision to arrest him.  But on further questioning, Ford backed away.  The “theft” stood on its own, he said.

So I left this out of my 90 second story.  I left out Kamooneh’s allegation of police misbehavior, and the cop’s allegation that Kamooneh’s was “uncooperative.”  Such allegations often fly, on both sides, when there’s a criminal investigation.  It often makes sense for a guy like me to let them editorially cancel each other out– especially when they cloud the examination of the issue of the theft charge.

2.  Ford said Kamooneh had been previously warned by school personnel to stay off the tennis court.

When Ford mentioned this in our interview, my follow-up question was pretty simple:  How is that relevant to your decision to seek an arrest warrant and put the guy in jail for swiping a few pennies worth of electricity?  Ford’s answer was an admission that it ultimately didn’t matter.  The theft allegation stood on its own.

So I also excluded this tidbit from my 90 second story.  (Kamooneh subsequently said this “warning” was a complete fabrication.)

Apparently, Chamblee PD felt a bit of heat from its treatment of Kamooneh, who spent 15 hours in jail for stealing what Georgia Power estimated to be four cents worth of electricity.  The story became a bit of a sensation.  11Alive’s web story had 340 comments on it as of December 9.

Many of those commenting argued that a theft is a theft.  Sgt. Ford made that argument eloquently, and my story allowed him to do it — while answering reasonable questions that any person might want answered about such a case.

So my message to Chamblee PD would be:  Love you guys.  Love me some hardworking, underpaid and oft-challenged law enforcement personnel.  I’ve spent a career covering their heroics and occasional missteps.  Maybe you’ve had second thoughts about your treatment of this case; if so, say so.  But don’t blame Sgt. Ford for conducting an honest interview.  And don’t blame me for covering the story, and excluding the stuff that your own guy said was not particularly relevant to the arrest.

And when Colbert hits you up for an interview, say yes.