On behalf of the Atlanta media, I’d like to thank you for not blaming us for the slow response to the Tuesday storm we’ll call Gridlockalypse 2014.  Because one could argue that you could. 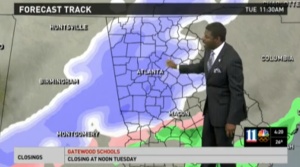 No, the blame rests with the government officials who failed to heed the hue and cry we raised Tuesday morning, when the National Weather Service issued a Winter Storm Warning at 3:39am.

That’s the technicality that lets us off the hook.

Here’s the reality:  The Atlanta news media — especially TV — likes nothing more than to raise a hue and cry about upcoming “weather events.”  And it doesn’t take a Winter Storm Warning to prompt it.  We get excited about Winter Weather Advisories, Winter Storm Watches, Severe Thunderstorm Watches, and Heat Advisories.  We get geeked when the temperature drops below freezing.

There’s a reason for that.  The audience actually turns on local TV news when they think the weather is getting bad.  It’s measurable.  And we are always happy to welcome our larger audience with hearty doses of the information they seek.

Whenever it happens, we are utterly truthful with the details. If the NWS has issued a Winter Storm Watch and not a warning, we’ll say that — over and over and over again, while producing  perilous-looking color schemes moving ominously across maps.

The problem, one could argue, is that we lack proportion.  We beat the weather drum with great urgency.  We put human beings — “team coverage!” — in the elements to add a measure of performance art to the story.  Residents of Carrollton are bracing for the line of thunderstorms that’s expected here any minute.  As you can see, the wind is starting to pick up and the sky is darkening…

It may not be apocalyptic, but it sure seems that way.

Can you blame state officials for failing to discern that the real thing was advancing upon us Tuesday?

Technically, you can.  A Winter Storm Warning means that a winter storm is “imminent or occurring.” The word “warning” is always the key when attuned to NWS information.

But what if TV and radio routinely makes it sound like the bogeyman is about to get you?  It is up to you, dear viewer, to know the difference.  Sometimes, we just give you information that merely sounds really, really urgent.  And other times, you need to react by closing schools and staying off the roads.  (But by all means, go purchase some bread and milk first, and be sure to say hi to our highly trained journalist stationed live outside your grocery store.)

Meantime, you’ve got political appointees running agencies like the Department of Transportation and the Georgia Emergency Management Agency who are supposed to discern the subtle differences between our usual weather drumbeat, and the real deal.

So yes:  An alarm should go off in GEMA whenever the NWS issues a Winter Storm Warning.  That’s a tangible signal that our routine drumbeat of weather coverage has flipped into something genuinely noteworthy, and its time to activate Georgia’s paltry fleet of salt trucks.

Likewise, it would have been unseemly for Mayor Kasim Reed and Gov. Nathan Deal to point back at the news media and say “it’d help if y’all only got excited about serious weather.  Because it’s kind of hard to tell when it’s really getting dangerous, or whether it’s just y’all trying to excite the audience and keep them tuned into your TV station.”