Something awful happened to my industry on September 11, 2001.  On that date, we stopped using our news judgment.  Not all of it, of course.  But in many important ways, we allowed pranksters to start running our lives, deciding how we would use our resources and what we would cover.

In the first twenty years of what passes for my career in the news biz, we would mostly ignore bomb threats and suspicious package calls.

Sure, a bomb threat would mean evacuating hundreds of people from a courthouse or school.  It would mean the presence of lights-flashing cop cars and “bomb disposal unit” trucks, accompanied by cops with bomb gear and trained dogs and maybe a remote-controlled robot on wheels.  The visuals were compelling.  The false drama of will there or won’t there be a mushroom cloud at any moment would be somewhat compelling.

But we all but ignored it.  And it was the right thing to do.

And there was never a debate.   It was a given.  TV shops might send a photog to a bomb threat, just to be there in the unlikely event of an actual mushroom cloud; if they had a photog available. 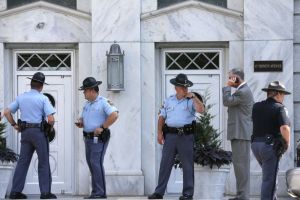 But a live truck?  Not likely.  A reporter?  They were, hopefully, too busy covering actual news generated by non-pranksters.  Covering events that were, 9999 times out of 10,000 likely to be hoaxes was considered a waste of resources and a breach of our responsibility to the community.  It sounds so quaint now.

Then starting in September 2001, all bomb threats instantly had the whiff of Al Qaeda behind them.  Never mind that real terrorists probably had bigger fish to fry than local courthouses and schools in Georgia. At that point, defending “the homeland” became a national fixation.  Cable news began running bottom-of-the-screen crawls to lend greater urgency to everything.  Local news struggled to contribute something relevant to the national story.

So we bowed to the pranksters who called in bogus bomb threats.  Add to that the kids who drop notes threatening to do harm inside school buildings.  During one two-day period last week, at least seven public schools in Georgia went on lockdown.  In one of them, a kid brought a gun to school but harmed nobody.  The others were hoaxes.

Now, off we go.  We send helicopters.  We dispatch crews in live trucks, interviewing evacuees or worried parents, reporting the inevitable hoax yet still passing it off as news.  More than a dozen years after 9/11, we still do it.

Our newsrooms are now staffed with people whose careers didn’t blossom until after 9/11.  They don’t even realize that there was a time when newsrooms exercised actual discretion in such matters.

These same folks are also plugged into social media, which is a tremendous resource for raw intel.  If it’s getting tweeted, then the word is getting out.  If “the word” is confirmed by news professionals, shouldn’t we report it too?   Can we let Twitter beat us on stories of bomb threats and such?

Hell yes we can.

Let social media have the scoop on bomb threats.  The word will still get out.  Y’all don’t need us for that.

Meantime, let the pros devote their resources to the stories that the social media amateurs don’t learn until they see it in the commercial news media.

We get our resources and our credibility back.  We regain some of the sense of responsibility we willingly gave up more than twelve years ago.

Pranksters will continue to try to manipulate police and government by creating hoaxes.  Sadly, they lack the discretion to ignore their pranks.

But the news media has that discretion.  We used to call it “news judgment.”  We ought to start using it again.