Sunday, Georgia State University consummated its bewildering decision to transfer control of most of the programming on WRAS-FM to Georgia Public Broadcasting.

GPB has expanded its audience with the flip of a switch and a negligible transfer of cash.  Broadcasters dream of such stuff.  It is probably the crowning career achievement of GPB’s president and CEO, Teya Ryan.

Somehow, Ryan sweet-talked GSU president Mark Becker into handing over GSU’s most unique and nationally-recognized asset, its 100,000 watt FM station, in exchange for vague promises of internships at GPB and TV programming opportunities.  Becker is in the thrall of Georgia’s new film industry presence, and justifies the gutting of WRAS as a way to get an unspecified number of GSU students “experiential” TV and film opportunities.

GPB was cunning and opportunistic.  But Becker is the guy who gave it away.

Here’s my favorite part of the GSU press release issued last week:  Through the partnership, Georgia State students will be involved in producing 12 hours of daily programming every day of the year on GPB’s digital television network.

It sounds great in a press release, but raises an obvious question:  Is GPB and / or GSU anywhere close to being staffed and equipped to produce 12 hours of daily TV programming?

By comparison, WAGA produces ten and a half hours of local news programming every weekday.  WAGA has scores of overworked professionals making pretty good money grinding out all that content, under deadline, every day.

Does GPB / GSU even have a plan for those twelve hours of daily TV programming?  Or a clue as to how to use college students to produce it?

Given my first-hand experience as a GSU communications instructor, it seems a bit implausible.  Here’s the thumbnail:

In the spring of 2009, I was tasked to teach broadcast writing and production, “JOURN 4740 News for Telecommunications.”  The class would include a video component.  Midway into the semester, I would assign stories.  Students would shoot and edit them on GSU equipment.

GSU charged students an extra $100 fee for use of GSU video cameras.  And then — I learned that GSU had failed to allocate cameras to my class.  Nobody told the equipment guy about my class.  The students got no cameras.  But GSU refused to refund the fee to the students!  I was horrified.

GSU justified taking the fee because the students still had access to a video editing lab — to edit video they couldn’t shoot.

Most of my 17 students were not nearly as surprised as I was.  Most were due to graduate that spring.  They’d viewed it as more of the same at GSU.

From last week’s press release:  With its strong and growing connections to the dynamic Atlanta film industry, Georgia State is the premier institution in Georgia for film and broadcast study. Its film and journalism programs are among the largest of their kind in the nation, with more than 2,000 undergraduate students.

Wow!  What an awesome school GSU has become in the five years since my pathetic experience there as a communications instructor.  It is all undoubtedly due to the amazing work of Dr. Becker, who showed up as president the same year.

I interviewed Dr. Becker this spring, and it took a very weird turn.

I had set up an interview with him about GSU’s property expansion downtown, and the school’s potential interest in available property at Turner Field, Underground and elsewhere.  When publicist Andrea Jones put me on his schedule the morning of April 8, I noted that the date coincided with the Braves’ home opener.  I told her that if Becker said anything interesting about GSU’s interest in the Turner Field property, it would be especially timely.

That morning, Becker affably told me that yes, GSU was interested in Turner Field’s potential as student housing and a mixed-use development space.  In response to a question, he also mused that he could see repurposing Turner Field into a football stadium for GSU.  In person, Becker seemed down-to-earth, likeable and forthcoming.

Good story, right?  It was the first time GSU’s president had confirmed interest in developing that area after the Braves leave for Cobb County in 2017.

The next day, GSU’s online publication The Signal tried to verify the story.  Becker, through Jones, told The Signal that I had “manufactured” the story.

For whatever reason, Becker had decided to backpedal on the tentative interest he’d expressed to me about Turner Field.  The obfuscation to The Signal was laughable, though, given that 11Alive’s web site and video showed the actual words coming from Dr. Becker’s actual mouth. 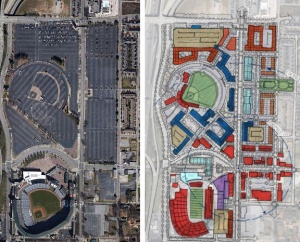 I didn’t take it personally (I didn’t learn about The Signal piece until several weeks later).  But it delivered an odd snapshot of a doctorate-holding man who, despite advance notice of the subject of our interview, had apparently given little forethought to what he might say.

A month later, GSU revealed its official offer for the Turner Field property.  GSU produced artwork of a mixed-use development, and a stadium retrofitted for football — verifying what Becker had told me in my “manufactured” story.

And on the same day, GSU announced its stunning giveaway of WRAS.

Students, alumni and listeners of WRAS raised a shitstorm that seemed to catch Becker by surprise.  Somewhat paralleling his experience with me, he began backpedaling his decision — first, by delaying the takeover; then, by issuing last week’s press release saying “The university is pursuing options to secure daytime broadcast time for WRAS after the [GPB] partnership is initiated…”

The same press release describes WRAS as GSU’s  “heralded student-run radio station,” a too-late acknowledgement that this radio station is more than merely another university “asset.”

The “heralded” student run station — the one that Becker now knows had a groundbreaking 43-year history —  is now dead on radio most of the day.  The student-programmed HD signal GSU promised doesn’t exist yet.  The student-programmed daytime web stream barely exists.  The apps to hear the daytime student programming sometimes work, sometimes don’t.  The GPB internships don’t start til 2015.

And Becker?  He appears to be trying to show students that he didn’t really mean to screw them out of their student-run radio station.  Kinda like he didn’t really mean to tell me about his designs on Turner Field — but then jumped in and did it anyway, embracing it weeks later.
It suggests the fix is in for GSU to fully embrace its new GPB “partnership” — once both parties think GSU students and WRAS backers have stopped paying attention.

“Pft” was her response, followed by a sharp look that let me know I was wasting my breath.  Molly Baker, WXIA’s 7pm producer, always looks nice. It was no secret I needed a decision that would seal my fate for the day.  My initial approach was hamhanded and pathetic.

“What about me?”  Marcita’s desk adjoins Molly’s.  She saw an opportunity to exploit my growing embarrassment, and took it.  “Don’t I look nice too?”  Marcita Thomas produces the 6pm newscast.

Rarely does a day pass when I don’t end up at the cubicle pod dominated, during daylight hours, by Molly and Marcita.  I am nearly always there with hat in hand, hoping to sweet talk a few extra seconds out of them for whatever awesome TV story I’m producing for that night’s newscast.

Although I will typically approach a specific producer about a specific newscast, all ears in the pod will perk up.  Judgments are made, not only about the outrageousness of my request for fifteen extra seconds of time, but also for the logic offered.  Style points are added and subtracted, depending on my level of humility and / or humor. But the response to any request for additional time is almost always a cold calculation, regardless of how charming I try to be and how flawless my logic is.

Lisa Turner, who produces weekend newscasts and often steps in for nightly newscasts as needed, is the most Type A of the three.  When I approach her for extra time, the initial answer is often an incredulous outburst, high in volume and pitch.  I’ve learned to wait for the eruption to subside as she starts to do the math in her head.

Like Molly and Marcita, Lisa strives to be agreeable.  Problem is that every knucklehead assigned to a 1:20 slot in a newscast seems to want / need more time within the finite confines of the thirty-minute broadcast.

Molly is the towering upper Midwesterner who betrays an occasional Fargo-type accent.  Marcita has deeper Atlanta roots and is the only producer in the room who predates my 2009 arrival at WXIA.  Both retain an admirable, evenhanded Zen quality about them even as some of their excitable co-workers are pronouncing stories to be “huge” while the details are only beginning to dribble out.

Eighty percent of the time, they say “yes” when I’ve offered a proper grovel.  When they say “no,” they mean business.

Producers have only a measure of control over the time slots allotted in their newscasts.  Loquacious anchors and weathercasters will ramble on sometimes, buoyed by the certainty of their own cleverness; reporters doing live shots will go long out of a sense of if you’re gonna make me stand out here, then by gosh, you’ll get an earful.

Bottom line is, if a producer wants me to stay within an allotted time, I’ll try to bust my hump (and even gut my story) to do it.  Because she’ll remember if I don’t.  And next time, I want her to say “yes” when I come groveling.