This post has to start with an admission:  I’m a bit of a thief.  I stole shamelessly from Tom Corvin.

When Corvin showed up as a freelancer at WAGA in the early 90s, he was a brooding, too-tall, chain smoking enigma; viewed warily as the object of a recently blown-apart relationship with a well-liked 11pm newscast producer. 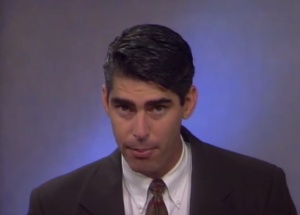 Then Budd McEntee put him on the payroll as a reporter, and it kind of transformed the whole newsroom.

Corvin was a ridiculously talented writer, who packed multilayered, mindbending copy into prosaic ten or fifteen second increments, multiplied across the breadth of a 90 second or four-minute piece of TV.  At the same time, he rarely overwrote.  Some of his best pieces had no narration at all.

Corvin viewed TV news as filmmaking.  He didn’t shoot his own stories, but he was the director of photography on his shoots.  In our shop, he blazed trails on techniques widely used today as afterthoughts:  Wide angle lenses, starkly-lit interviews, using foreground objects to frame background images.  Corvin had a sharp eye for meaningful cutaways that lent texture (and often irony) to stories.

Compound the irony with his Rod Serling-esque delivery, and the copy he wrote for anchors.  You can just envision Corvin chuckling as he wrote lead-ins to his pieces, wondering if Jim Axel or Brenda Wood would actually intone the circuitous barrage of words he’d written for them.

He was also the king of the standup-as-cameo.  He was loathe to make a story about him, but understood that local news more-or-less requires the presence of the reporter as newsgatherer.  His interactions with newsmakers added Corvin’s personality to stories and enhanced the journalism at the same time.  His occasional appearances as a participant or observer were typically brief, surprising and hilarious.

In May 1993, WAGA sent Corvin out to produce a series called “Night People.”  In it, Corvin visited the legendary 24-hour gay bar Backstreet for a look at Charlie Brown’s Cabaret, the nightclub’s infamous drag show.  (Years later, Backstreet was forced to shut down after WAGA’s I-team exposed its 24 hour license as a sham.)

In July 1994, Corvin produced a two-part series (!) on Romeo Cologne, the Atlanta DJ who brought back disco and continues to power funk dance parties around town.  The pieces, shot by Jeff Moore, blew my mind stylistically.  (“This is out of control,” said Mrs. LAF when I showed her the Cologne series last weekend.)

“Night People” was an apt subject for Corvin, inasmuch as he became one of them, a bit of a legend for his after-hours carousing in Little 5 Points and beyond.  I still get asked about his doings all the time, and not by people who watched local news.

He left WAGA to move to Kansas City, where he pulled a nights-and-weekends shift at a TV station, then left the business and never returned.  He wrote a rousing, fanciful resignation letter, posted on this site in 2008, that was a cri de coeur about the things that drive everybody in our business a little nuts. 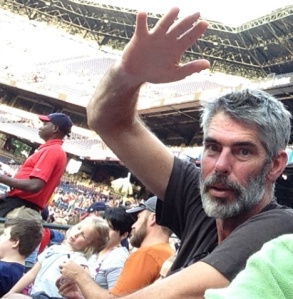 He now lives with his family in San Francisco.  Prior to a recent trip to Atlanta, I twisted his arm into bringing the Cologne pieces with him, and he obliged with an entire Beta tape filled with his now-vintage work at WAGA.

The son of a Baptist minister and a Bob Jones University graduate, he has reacquainted himself with Christianity and has evened out his life.  He ought to be a fighting off offers for TV and teaching work, but competes against kids who are now mimicking, digitally, what Corvin did in analog twenty years ago.

“Everybody’s a thief,” he texted me when I gave him a heads-up about this post.  Count me among the many who swiped from him.

12 thoughts on “The auteur”