It wasn’t the only one. I actually lost my entire rolodex.  But Killer Mike’s number could have come in very handy last week, as the rapper and Run the Jewels artist became the official Atlanta escort of presidential aspirant Bernie Sanders.

Killer Mike’s intro of Sanders at the Fox Theater went kinda viral.  Killer Mike had become — at least, in our local newsroom — a somewhat hot commodity.  I’m pretty sure I was the only guy in the building with his cell.  But it was gone.

My iPhone had become clogged with digital gunk.  I had offloaded all my photos and videos, yet the phone complained it had no storage space.  I resolved to solve the problem.

I had backed it up to my Mac.  It’s the hifalutin Mac Pro tower I bought during my days as an aspiring  businessman.  It’s got, like, four processors and tons of space.  When I bought it in 2008 — a tax deductible business expense — it was top drawer.  Even though Final Cut Pro and other programs on it have become outdated — and even though it lacks the mobility of a laptop  —  it’s still top drawer in my book.

So I backed up my iPhone to the Mac Pro.  Compatible Apple products.  Seemed like a no-brainer.  I did not back it up to the cloud.  It seemed wrong to send Mayor Kasim Reed or Rep. John Lewis’s cell phone numbers to such a place when I am reluctant to share such confidential info with my trusted and beloved coworkers.

Besides, I backed up my iPhone regularly to my awesome Mac Pro.  In the event my phone fell into a lake or got run over by a bus, I thought I was covered.

About my contacts:  They include lots of cell numbers of members of the legislature, several members of Congress, and lots of routine contacts, friends and family and coworkers, and a few outliers.  (Aside from Killer Mike, I’ve got a cell phone number that I’ve never used for Patti Smith. I’m not convinced it’s actually hers. Plus, what would I say to Patti Smith?  “Hi Patti. I’m Doug. I cried like a child at your concert in Kansas City in ’78…”)

Without my contacts, I am nothing.  So I meticulously backed them up.

I backed it up again at 6am Saturday November 21, then proceeded to restore the iPhone.  It essentially wipes the phone, reverting to factory settings.  It’s an option on iTunes — and a good way to eliminate digital gunk.  Once wiped, there’s an option to use your backup to restore your contacts and apps.

So I did that.  Minutes passed. Timeline bars went from zero to 100.  And then came the prompt that said my backup was “corrupt.” Failure.

This happened a half-dozen times.  My contacts never backed up. 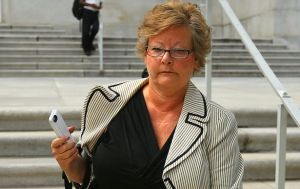 Elaine Boyer probably backed up her iPhone before she headed to federal prison. AJC photo

(I knew some of my contacts were corrupt.  There’s the county commissioner who is now serving time in federal prison; the city councilman caught spending tax money on personal business; the sheriff who beat racketeering charges but now faces another criminal charge. Without a little corruption, I’m out of business.)

So I showed up at work with a phone lacking contacts.  It felt like part of my brain was gone — in addition to the parts that already are.

Coworkers would text me. Their numbers would appear, but not their names.  I’d have to guess who was texting based on writing style or what they wrote.  Some of them, aware of my plight, courteously ID’d themselves.  When I went to call my mother on Thanksgiving, I had to pull the number from a handwritten listing.

Without the contacts in my iPhone, I am merely a guy pushing quarters into a pay phone, dialing 411 — or calling the desk on the old two-way radio, requesting the assignment editor to make a phone call on my behalf.  This used to actually happen during the first 20 years of my illustrious career as a TV news goon.

Since Saturday, I’ve done live text chats with Apple service techs.  I’ve had the case bumped up to a senior service tech.  I’ve had a half dozen conversations with him, where I’ve screen-shared my computer and taken direction from him.  Each typically lasts an hour.  Each has ended in failure.  Between each conversation, he has collaborated with backstage engineers at Apple who have hatched new schemes based on files I’ve sent.

I should add that the Sacramento-based Apple guy assigned to my case, a man named Matt Krekorian, has been great.  He seems to have taken a certain amount of ownership of my issue.  He corresponds faithfully.  He is encouraging and upbeat.  Despite an absence of results so far, he gives me confidence that I’ll get most or all of my contacts back — eventually.

During our last conversation, I suggested simply sending Matt my entire corrupted backup, a 5GB file.  That happened the Saturday after Thanksgiving, one week after the crash.

But eight days have passed.  My phone is still in its virginal state, without apps, email, contacts.  Zip.

It’s been a dreadful waste of time.  Arguably, so has this post.  Please accept my apologies.   Here’s the takeaway:

Back up your phone to more than one computer.  Back it up to “the cloud.”  Back that thing up.