The Daily Show isn’t news.  But its successful merger of news and humor gives the TV news biz a potential tool to stop the bleeding, audience-wise.  The problem is, humor is tricky business.  Most of us aren’t nearly as funny as we’d like to think we are.

I’d be the first to admit I’m a slow-witted dullard.  Whenever I’m able to conjure a fragment of something humorous, it’s typically painfully premeditated.  That fact hasn’t stopped me from making the occasional effort at TV news humor.  Why?  I’m not sure, except that it’s an effective communications tool.  When a story can make you snicker a bit (for the right reasons), then it’s got a chance to be somewhat memorable.

For the moment, we’ll set aside the significant body of opinion that insists news should be a humorless, just-the-facts place.  We disagree on that.

I’ve found that the writing is only one part of the creation of a news story with humor (and frequently, it’s the culprit when attempts at TV news humor fail).  Mostly, it’s about a) putting a twist on a topic with b) offbeat, deadpan questions and c) editing.

Editing is key.   Editing is the reason Letterman is funny and Leno isn’t.  Or, one of the many. 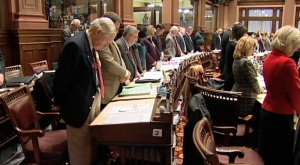 While observing a session of the legislature last month, I got locked into the House TV / Radio gallery while the Chaplain of the Day spoke.  It happens every day the legislature is in session:  Reporters (and lawmakers) have to decide in a split-second, following the roll call, whether or not they want to stay locked in the chamber for however long the Chaplain decides to intone.

On this particular day, I stayed inside.  During this moment of reflection, I had a dim light-bulb-above-the-head moment:  Why lock the doors for the chaplain, but keep them unlocked for the important business of lawmaking?  Does it mean the spiritual message is more important than the political ones?  I pictured Samantha Bee tackling this story and got inspired.

Of course, I ended up with a story that wasn’t nearly as amusing as Bee’s take would have been.

Three points worth noting about this story:

I interviewed  30-plus year veteran WAGA photog Ira Spradlin.  Though this was potentially an absurd media-interviewing-media moment, this made sense.  Ira has been locked in the chamber more than most folks at the Capitol.

Second, a discussion at WXIA resulted in the deletion of what was easily the most amusing moment of the piece.  At 1:36, Rep. Mike Jacobs reveals that he’s heard some 200 sermons, “and I’m Jewish!”  I followed with what I thought was a question Bee (or John Oliver or Stephen Colbert) would have asked:  “So has this improved your relationship with Jesus?”

Jacobs threw his head back and laughed.  He then said “let’s just say, as a fan of the Old Testament, I am judicious about when I give the prayer and amen.”

Unlike comedy, TV news tries to respect religion.  Though Jacobs and I were amused by the moment, this had “trouble” written all over it.  Cooler heads at WXIA, led by the bosslady, put that clip onto the nonlinear editing version of the proverbial cutting room floor.

She made the right call.  Absolutely.

Third:  The more I watch this story, the less amused I am by it.

When I was a young, aspiring TV news guy, I was inspired by folks like David Brinkley and Mike Wallace.  As an old TV news guy, folks like Bee, Colbert and Jeanne Moos have taken their place — and raised the level of peril for those of us who aspire to occasionally amuse the audience.